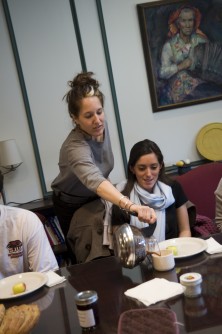 Newswise — Writer Tenaya Darlington, M.F.A., assistant professor of English at Saint Joseph’s University in Philadelphia, has a passion for cheese. She loves it so much that she has rarely met a cheese she didn’t like, and says the stinkier and stronger the cheese, the better. Darlington also loves food writing, so she combined her two passions when she started her popular food blog Madame Fromage: The Pillow Book of a Cheese Lover.

“Within the last decade, the food writing genre has become an American obsession, from best-selling memoirs based on food to food blogs and food journalism books,” says Darlington. “I had been a food writer in Madison, Wisc., before moving to Philadelphia to teach, and I missed it. Since I wanted to try blogging, I decided to experiment with a cheese blog.”

For Darlington, things really came together when she proposed a course in food writing at Saint Joseph’s for spring 2010, which, among other assignments, included authoring a food blog. Her student Dan Westiner started “earth and fork” last spring, a blog that has really taken off, according to Darlington.

The course was so successful it was offered again in the fall. “It’s an opportunity to look at why there is such interest in food writing and why so many Americans are self-confessed ‘foodies,’” says Darlington. “And students put their writing chops to the test by developing food blogs.”

To hone their epicurean and descriptive skills, Darlington devised several ingenious in-class activities to stimulate palates and imaginations. For a produce auction, students ‘bid’ on unusual fruits and vegetables that they then eat and about which they write detailed descriptions. “The exercise requires thinking beyond the obvious – they can't just say that something is ‘delicious,’” says Darlington. “They have to think through flavor and texture, and consider writing for an audience.”

The syllabus, organized in three sections, is akin to a menu – roughly four weeks each for breakfast, lunch and dinner. This allows the class to break bread together, starting with a breakfast of local foods prepared by Darlington. A few weeks later, lunch is served at Reading Terminal Market, where students are introduced to foods they may have never sampled. Plans for dinner are determined as a group, late in the semester.

The delights of the class are not all gustatory. The reading list draws from a wide variety of contemporary food writers/journalists, beginning with Michael Pollan’s best-selling book, The Omnivore's Dilemma.

“Reading Pollan’s book made me realize we’re inundated with an overwhelming number of foods, but since much of what we eat is influenced by government policies and food corporations, we usually buy the cheaper, less humane, less nutritious processed foods,” says English major Mattie Aguero of Philadelphia.

“I want students to understand the politics of food production,” says Darlington. “Being a food writer requires understanding the plate on many levels – not just as cuisine, but as a series of interconnected stories between food producers, politicians, flavorists, chefs, writers, diners, pilots and even truckers.”

Darlington notes that at the semester’s start, many students ate out of cans and boxes – in other words, processed foods. “We considered the implications of our eating habits – how they affect us socially, spiritually – even ecologically. Students were shocked when they began studying the ingredients in frozen dinners and bottled pasta sauces.”

The course also inspires students to cook. “Many start shopping at local markets, which really energizes them. They stride into class, so proud of the stir-fry they made or the homemade bread that is home cooling on the counter. During spring semester, perhaps 80 percent of my students had never used an oven. By the end, they were baking bread and cooking venison.”

And they were eating cheese. “When we first met last term, many told me they didn't like cheese, or that they only ate Kraft Singles,” says Darlington. Which was anathema to Madame Fromage, her blogging alter ego.

“By May, their food consciousness had been raised, and they were eating raw-milk cheddar from a local Amish producer and devouring triple crèmes and blues,” says Darlington. “The key was giving the students tools to talk about cheese, so that they could begin to express their likes and dislikes. The class favorite was a goat cheese from California, Cypress Grove's Purple Haze. It's a downy puck rolled in fennel pollen – exquisite.”