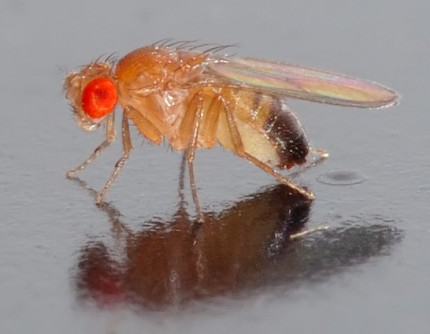 By André Karwath via Wikimedia Commons

Fruit flies may help scientists understand the underlying mechanism by which HPV can cause cancer as well as identify potential drug treatments.

Newswise — Human papillomavirus (HPV) is one of the most common sexually transmitted infections in the United States and has been identified as a primary cause of cervical cancer in women. Now, an international team of researchers led by the University of Missouri has completed studies on fruit flies with a condition that mimics a form of HPV-induced cancer. The fly models the team developed may help scientists understand the underlying mechanism by which this virus can cause cancer as well as identify potential drug treatments. The study appears in today’s issue of PLoS Pathogens.

“This is the first model of an HPV-induced cancer in fruit flies,” said Bing Zhang, professor of biological sciences in the MU College of Arts and Science. “This new model will help scientists understand the molecular and biochemical pathways involved in tumor growth and malignancy caused by HPV as well as screen for potential drug targets.”

Previous studies conducted in human cells and in mice have shown that the virus enters the body through the skin and produces several oncoproteins, which are proteins that can transform a normal cell into a tumor cell. One of these viral oncoproteins, called E6, plays an important role during the later stages of tumor formation and metastasis.

In the study, led by Mojgan Padash, a postdoctoral fellow at the University of Missouri, the researchers introduced the viral E6 oncoprotein and a human protein that is necessary for E6-induced cancer into fruit flies. The proteins caused severe abnormalities in the epithelial, or skin, cells of the fruit flies. The researchers also show reduced levels of the same suite of proteins targeted by E6 in humans. Further experiments done in human cell lines with the fruit fly version of the E6-targeted proteins yielded similar results, providing additional evidence that E6 works the same in flies as it does in humans.

Although cellular abnormalities resulted, the scientists found that the E6 proteins were not sufficient enough to cause tumors in flies. Since it is thought that mutations in a human oncoprotein, called Ras, may contribute to E6-mediated tumor development in humans, the researchers introduced this third protein into the flies. With all three proteins present, the flies developed malignant tumors that metastasized.

“The take home message is that the same key molecular players that underlie HPV E6-mediated cancer in humans do the same things in flies,” Padash said. “Practically speaking, this means we can now use this fly model to identify other essential components that contribute to E6-mediated tumorigenesis, which has the potential to translate into therapies for HPV-induced cancers.”

“The model that has been developed has been used to identify other essential pathways that contribute to E6-driven malignancy,” said Lawrence Banks, head of the Tumor Virology group at the International Centre for Genetic Engineering and Biotechnology in Trieste, Italy, and a coauthor of the study. “The power of this model is that it can be used now to screen for inhibitors of other pathways, which have the potential to translate into therapies for HPV-induced cancer.”

The study, “A Drosophila model of HPV E6-1 induced malignancy reveals essential roles for Magi and the insulin receptor,” was supported by grants from the National Institutes of Health (RO1NS060878), the University of Missouri, the Canadian Institutes of Health Research (MOP-123420) and the Italian Association for Cancer Research. The work was performed in collaboration with Vanessa Auld, professor of zoology at the University of British Columbia in Canada, and Lawrence Banks, group leader of tumour virology at the International Centre for Genetic Engineering and Biotechnology in Italy. The content is solely the responsibility of the authors and does not necessarily represent the official views of the funding agency.