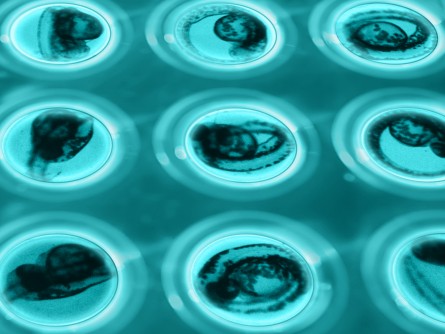 Newswise — In the April 2018 issue of SLAS Technology, Breitwieser and colleagues of the Karlsruhe Institute of Technology (Germany) describe a fully automated high-throughput sorting system for zebrafish embryo phenotypes that benefits high-throughput screening by saving time and improving accuracy.

The new sorting system is based on a modular robot and an image analysis system comprising two cameras with different magnification lenses and fields of view.

One camera is used to detect clustered objects and isolated embryos, whereas the second camera is used for identifying phenotypes by means of computer-based image analysis. Subsequently, the embryos are transferred by the robot from a Petri dish into the wells of a 96-well microplate. Zebrafish embryo mutants that exhibit a glucocorticoid deficiency are detected reliably and separated from wild type embryos, and the system can easily be extended to sort phenotypes with other morphological features.

Large numbers of genetically modified embryos are needed in research for toxicology testing, drug screening, developmental biology studies and cancer research. Manual sorting of larger numbers of embryos under the microscope is a tedious task and prone to errors.

Fully Automated Pipetting Sorting System for Different Morphological Phenotypes of Zebrafish Embryos can be accessed for free (for a limited time) at http://journals.sagepub.com/doi/full/10.1177/2472630317745780. For more information about SLAS and its journals, visit www.slas.org/journals.