Function of Mysterious RNAs May Often Lie in Their Genes 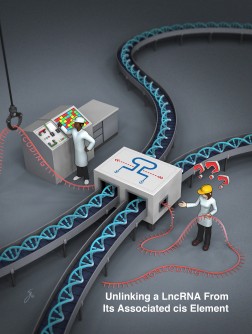 Newswise — PHILADELPHIA—A new genetic clue discovered by a team co-led by a researcher at the Perelman School of Medicine at the University of Pennsylvania is shedding light on the functions of the mysterious “long non-coding RNAs” (lncRNAs). These molecules are transcribed from genes and are often abundant in cells, yet they do not code for proteins. Their functions have been almost entirely unknown—and in recent years have attracted much research and debate.

Reporting in the journal Molecular Cell, the scientists determined that one prominent lncRNA may be a “red herring,” with no evident biological role to play—whereas the DNA from which it originates does perform an important function, as an “enhancer” that stimulates the expression of an important protein-coding gene nearby.

“An implication of this finding is that many lncRNA-producing regions of DNA may not function through their lncRNA products at all, but only through the DNA itself,” Vikram R. Paralkar, MD, an instructor in the division of Hematology/Oncology at Penn’s Perelman School of Medicine, and first author of the study, said.

Some non-protein-coding genes produce small RNA molecules, and many of these have known functions, often in regulating other genes or RNAs. But thousands of our genes produce lncRNAs—defined as being at least 200 nucleotides in length—and their functions remain poorly understood.

In a study published in 2014, Paralkar and colleagues identified over a thousand distinct lncRNAs in mouse and human blood cells. Most had never been described before. But many turned out to originate from areas of the genome containing known or suspected enhancers—small regions of DNA where transcription factor molecules gather, to stimulate the transcription of nearby genes.

In the new study, Paralkar and colleagues, including senior author Mitchell J. Weiss, MD, of St. Jude Children’s Research Hospital in Memphis, and researchers from The Children's Hospital of Philadelphia, examined the possible enhancer function associated with one of these mystery lncRNAs, a product of a mouse gene called Lockd.

The Lockd RNA product is particularly abundant in mouse red blood cells and some other cell types. One possibility is that this lncRNA has some undiscovered function in cells. Another possibility is that the Lockd DNA itself has some function, while the RNA transcript is without function—a genomic “red herring.”

To investigate the functions of Lockd, Paralkar and colleagues used an advanced gene-editing technique to delete the Lockd DNA from a mouse blood cell line. “When we did this, the expression of Cdkn1b was reduced by 70 percent,” Paralkar said.

The researchers found strong evidence that in the twisted, looping, double-helix structure of the genome, the promoter end of Lockd DNA comes into direct physical contact with the promoter end of its neighbor Cdkn1b, and in that way acts as an enhancer to stimulate Cdkn1b’s transcription.

Paralkar acknowledged that the Lockd RNA may one day be found to have some other function. “It’s impossible to prove absolutely that it has no function—but it seems at least that it has no obvious function in regulating its neighbor Cdkn1b,” he said. He emphasized, however, that in determining the function of non-coding DNA and RNA, both DNA-deletion and RNA-blocking experiments—as in this study—are needed to distinguish the function of DNA from its RNA product.

“One has to decouple the transcript from the DNA,” Paralkar said. “Future studies of lncRNA function should adhere to that requirement.”

He added that the discovery of this enhancer function for one example of a lncRNA gene points to the possibility that this is a broadly used mechanism in the genome, found in non-coding and perhaps even some protein-coding genes. Indeed, enhancers are theorized to be one of the key genomic features that distinguishes species such as mice and humans—which share nearly all their protein-coding genes, but relatively few of their enhancers and lncRNA-coding genes.

“The fact that mice and humans are so different may be due largely to the fact that their genes are being regulated so differently by enhancers, some of which produce RNA molecules that we detect as lncRNAs,” Paralkar said.