A new book by the Rev. Edward R. Udovic, C.M., offers a translation of the eulogy given by Henri de Maupas du Tour and takes a snapshot of 17th century France at the time of Vincent de Paul’s death 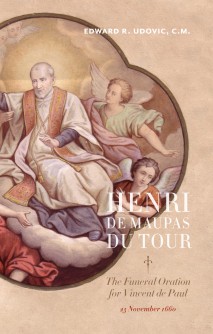 A new book by the Rev. Edward R. Udovic, C.M., offers a translation of the eulogy given by Henri de Maupas du Tour and takes a snapshot of 17th century France at the time of Vincent de Paul’s death.

Newswise — CHICAGO — Nearly 25 years ago, an archivist from the Sisters of St. Joseph came across a copy of the eulogy for Vincent de Paul given in Paris by Henri de Maupas du Tour in November 1660. The archivist thoughtfully sent a copy of the French text to the Rev. Edward Udovic, C.M., a Vincentian historian. Over the next two decades Udovic, a DePaul University executive, translated and fully annotated the text. Udovic’s translation of the eulogy serves as the centerpiece for his latest book, “Henri de Maupas du Tour: The Funeral Oration for Vincent de Paul, 23 November 1660.”

“This is the first public reflection on the life of Vincent after his death,” said Udovic. “Everything that Maupas du Tour talks about in the eulogy became the basis for the first biography of Monsieur Vincent published by Louis Abelly in 1664,” he noted.

“Maupas du Tour assumed that one day Vincent de Paul would be canonized by the Roman Catholic Church and his text is carefully crafted to support this movement. The text has never been translated into any other language and has never been annotated before, which is why this book will be a significant contribution to Vincentian historiography,” Udovic said.

Maupas du Tour was a bishop and close acquaintance of Vincent. Early in 1661 he published the text of his oration so that his reflections could be more widely shared. The translation by Udovic reveals a detailed account of Vincent’s life and personal virtues as well as providing a snapshot of church and state in France during that time period.

“The extensive annotations in the book help the reader to understand historical, religious, cultural and political contexts as well as the many textual references used by the author,” said Nathaniel Michaud, editor and director of publications for the Vincentian Studies Institute.

In addition to translating the text, the book offers three introductory chapters. The first provides a short biography of the author Henri de Maupas du Tour. The second offers a detailed analysis of the content of the funeral oration. Since the eulogy was designed to show Vincent’s great personal sanctity in preparation for an eventual introduction of his cause for canonization, the final chapter traces Vincent’s canonization cause to its completion in 1737.

The new work has received advanced praise by a number of historians and other experts in Vincentian history and spirituality. The Rev. Robert P. Maloney, C.M., the former Vincentian superior general said: “Rev. Udovic presents an enormous amount of original research about Henri de Maupas du Tour, the literary form of funeral orations, their sometimes political goals, and the canonization process of St. Vincent. I recommend this book highly to those who love Vincent de Paul and are eager to know more about this extraordinary period of history.”

The book will be available for purchase April 24 at http://www.setonheritage.org.A video book trailer is at https://youtu.be/PDO5XARmSrM.