Future Computers that are "Normally Off" 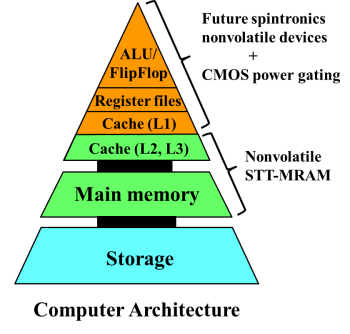 Computer architecture of the future, based on spintronics and nonvolatile STT-MRAM devices.

Newswise — WASHINGTON D.C., April 8, 2014 -- If a research team in Japan gets its wish, "normally off" computers may one day soon be replacing present computers in a move that would both eliminate volatile memory, which requires power to maintain stored data, and reduce the gigantic energy losses associated with it.

Most parts of present computers are made with volatile devices such as transistors and dynamic random access memory (DRAM), which loses information when powered off. So computers are designed on the premise that power is "normally on."

Back in 2000, the concept of "instant on" computers based on magnetoresistive random access memory (MRAM) emerged as a way to reduce that irritatingly long hang time associated with powering up – but it comes with a big tradeoff because it requires using volatile devices that continue to devour energy after the initial power up.

By 2001, researchers in Japan figured out a way to eliminate this pointless energy loss by using a nonvolatile function of advanced spin-transfer torque magnetoresistive random access memory (STT-MRAM) technology to create a new type of computer: a "normally off" one.

Now, Koji Ando and his colleagues at the Japanese National Projects have broadly envisioned the future of STT-MRAM, and in the Journal of Applied Physics, which is produced by AIP Publishing, they describe how it will radically alter computer architectures and consumer electronics.

"Spintronics couples magnetism with electronics at the quantum mechanical level," explained Ando. "Indeed, STT-MRAM no longer requires an electromagnetic coil for both writing and reading information. We're excited by this paradigm shift and are working on developing a variety of technologies for next-generation electronics devices."

The potential for redesigning present-day technologies so that computer power consumption is zero during any short intervals when users are absent is that may lead to extremely energy-efficient personal devices powered by a hand-crank or embedded solar panel. Such devices would find use in a wide swath of applications ranging from mobile computing to wearable or embedded electronics, and they would be of particular interest to the healthcare, safety and educational industries.

Some hurdles remain, Ando said. "We need high-performance nonvolatile devices that don't require a power supply to retain information to create 'normally off' computers while simultaneously guaranteeing sufficiently high-speed operation to manipulate information," Ando said. "The main memory, for example, requires performance as fast as 10 to 30 nanoseconds, and a density as high as 1 Gigabit per chip."

If STT-MRAM is to play a key role for "normally off" computers, it will first require the integration of a variety of technologies, he added. "We're currently collaborating with researchers in several fields – from materials science, device technology, circuit technology, memory and computer architectures, operating systems," Ando said.

The article, "Spin-transfer torque magnetoresistive random-access memory technologies for normally off computing" by K. Ando, S. Fujita, J. Ito, S. Yuasa, Y. Suzuki, Y. Nakatani, T. Miyazaki, and H. Yoda is published in the Journal of Applied Physics on April 8, 2014 (DOI: 10.1063/1.4869828). After that date, it can be accessed at: http://tinyurl.com/pjxvdu6

Authors on this study are affiliated with Japan's National Institute of Advanced Industrial Science and Technology, Toshiba Corp., Osaka University, University of Electro-Communication, and Tohoku University.