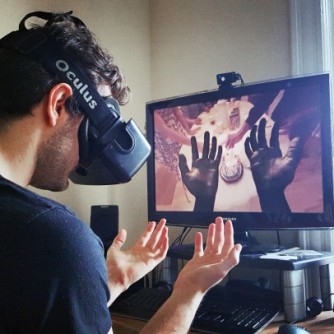 A virtual reality experience transforms the user into a 74-year-old named Alfred in order to see his perspective as a medical patient.

Newswise — Imagine sitting across from your doctor.He’s speaking to you, but you can’t hear him clearly. There’s a large black smudge where his face should be, so you’re unable to really read his lips. What he’s saying is important, so you lean in. But you’re frustrated as you struggle to understand what’s going on.

You’re experiencing life through the eyes of a 74-year-old patient named Alfred — seven minutes in the shoes of an elderly man whose audiovisual impairments are misdiagnosed as cognitive ones — and a story that students across many disciplines have worked together to create.

man using virtual reality headset to experience life as AlfredA virtual reality experience transforms the user into a 74-year-old named Alfred in order to see his perspective as a medical patient.“[We’re] trying to portray different kinds of medical conditions, sensory changes from the first-person perspective of a patient,” said Carrie Shaw, a master’s student in biomedical visualization and content creator of the case study titled, “We Are Alfred.” The project was the focus of Shaw’s research this year. It won first place in the Art/Design/Humanities & Social Sciences Category among graduate student projects at the UIC Research Forum, as well as the Vesalius Trust Scholarship Award.

Their goal was to craft an interactive, experiential product that could be used for curriculum in geriatrics — the health and care of elderly people — because of predicted growth in future U.S. aging populations and a disconnect between patients and the students or doctors who treat them.

“[Medical students] are usually in their early 20s and not experiencing those kinds of challenges yet, so we decided to create something that would give them the experience of what it might be like to go through the aging process,” Shaw said.

Users experience that with some headphones and the Oculus Rift Development Kit 2, a headset that can immerse them into a 360-degree virtual reality experience. The headset also includes a Leap Motion device that tracks and projects user’s hands in the story to make them feel like they’re Alfred.Becoming Alfred helps users empathize with and better understand elderly patients.

“The project is focusing on comfort,” said Eric Swirsky, clinical assistant professor of biomedical and health information sciences and a faculty adviser for the project. “It’s not curing, it’s not curative, it’s not even treatment-oriented. It’s about comforting and understanding where the patient is so that you can be with him.”

The group started with Alfred .5, the first iteration of the project. The prototype had a completely virtual environment. But after tests, trials, discussion and input from expert geriatricians, the second iteration was refocused to include graphic elements, real people and live scenes — a redesigned interactive cinema on an almost zero-dollar budget.“[Interactive cinema] is a kind of marriage of directing for film and directing for theater because you’re directing a 360-degree space where the user has the freedom to look wherever they want,” said the film’s director, Ryan Lebar, a student collaborator from the University of North Carolina School of the Arts.

The live-action story includes six scenes: “Happy Birthday Song,” “Day Dream,” “Wine Spill,” “Waiting Room,” “Taking the Cognitive Test” and “Follow Up With the Doctor.”UIC engineering students Thomas Leahy and Jakub Borowski used programming techniques and development tools to stitch together footage and add simulations of medical issues such as severe macular degeneration or hearing loss.“There were a lot of different, new technologies that we were trying to integrate together, and I think that was one of the biggest themes of our whole project,” said Leahy.

The group did a lot of troubleshooting and used each others’ expertise and ideas to solve problems and tackle challenges.“I think there’s just so much strength in diversity,” Shaw said. “It speaks to the complexity of life. If you work in one discipline, it’s easy to focus in on that one thing, working with yourself, but if you can balance working across a group of people with different ideas and perspectives, what you create winds up looking a little bit more like the things we actually have to deal with in the world.”

“They’re in the forefront saying, ‘Hey this technology is here and we could be doing more with it,’” added Leah Lebowicz, adviser chair for the project and clinical assistant professor for the biomedical visualization program.“And when we — people across many disciplines with different expertise — all get together, we can produce some amazing things. I think that’s what made this project so successful.”