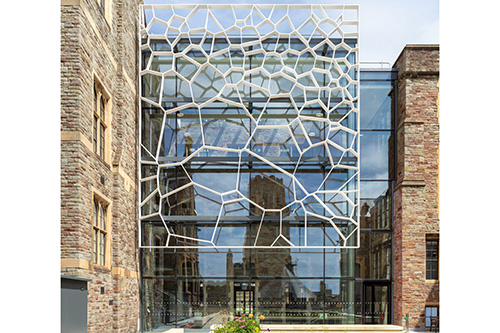 The Fry Building, where the Heilbronn Institute and University of Bristol School of Mathematics are based. The building features a unique sunscreen façade in the style of a Voroni diagram, named after the Russian mathematician Georgy Voroni, which are created by scattering points at random on a plane. Voroni diagrams have numerous mathematical applications, as well as in other disciplines such as modelling animal territories or crystal growth.

Newswise — A £20 million investment to champion innovation and nurture the greatest minds in mathematical sciences across the UK has been awarded today to the Heilbronn Institute for Mathematical Research (HIMR).

The grant from UK Research and Innovation (UKRI) forms part of a £300 million Government funding package over the next five years to advance excellence in mathematics, for which HIMR is renowned worldwide.

The vital role of mathematical science in helping understand and fight the COVID-19 pandemic has been proven and brought to the public eye over the past year. Perhaps less recognised, but no less important, the power of mathematics is being harnessed to develop highly complex algorithms to support future quantum computers which hold the key to a safer, secure internet. Behind the scenes, statistical and data science techniques are being deployed to model and combat cyber-attacks.

Researchers at the University of Bristol’s School of Mathematics, where HIMR is based, are pioneering such endeavours in collaboration with fellow experts at partner universities across the UK and internationally.

The extra funding is set to develop people and activities associated with the Institute, as a leading centre of mathematical research. This will include the expansion of existing Research Fellowship and Doctoral Studentship programmes.

Professor Geoffrey Grimmett, Chair of the Heilbronn Institute, said: “This very substantial grant will allow us to expand HIMR’S central role as a national institute dedicated to the development of excellence across UK mathematics. The award is a far-sighted recognition by Government of the importance of fundamental research, and it will support large cohorts of students and fellows as they build scientific careers and, in turn, foster future generations.”

The far-reaching impact of rigorous theoretical work undertaken by mathematical researchers is helping the Government and industry to overcome some of the biggest challenges facing today’s world, including climate change, counter-terrorism, and internet security. Mathematicians also discover fundamental truths about the universe. For instance, modern computing power is being combined with ideas from theoretical physics to unlock the mathematical mysteries of prime numbers, and this has many applications in daily life ranging from banking to communications and security.

Professor Jens Marklof, Dean of the Faculty of Science, said: “Advanced mathematics has become an indispensable tool in the digital world, providing powerful solutions for modern data analysis and secure communications. The Heilbronn Institute is at the forefront of research in this area, and this significant additional funding bears testament to its remarkable success to date.”

The funding boost recognises the institute’s track record in uniting academia with Government and providing an effective model for mathematics in industrial collaboration.

Professor Hugh Brady, Vice-Chancellor and President of the University of Bristol, said: “This is tremendous news for the Heilbronn Institute for Mathematical Research and the future of mathematical sciences at large. Recent events have highlighted more than ever the important work of mathematicians and data scientists, who grapple tirelessly with huge challenges which pose grave threats to our health and security. The funding will allow this highly-regarded institute to further support these unsung heroes and remain at the leading edge of developments in this fast-evolving field.”

Founded as a partnership with Government Communications Headquarters (GCHQ), the University of Bristol has been HIMR’S principal academic partner since its creation in 2005. Over the years it has attracted more than 200 mathematicians as members, including more than 90 research fellows from across some 25 UK universities. Its activities include conferences, focused research groups, workshops, and high-profile mathematical meetings.

A photo of the Heilbronn Institute for Mathematical Research (HIMR) and the University of Bristol School of Mathematics is available here: https://fluff.bris.ac.uk/fluff/u2/oc20541/_ZIDPD_uc2gIjxdsBVB_Vgyx2/

Photo caption: The Fry Building, where the Heilbronn Institute and University of Bristol School of Mathematics are based. The building features a unique sunscreen façade in the style of a Voroni diagram, named after the Russian mathematician Georgy Voroni, which are created by scattering points at random on a plane. Voroni diagrams have numerous mathematical applications, as well as in other disciplines such as modelling animal territories or crystal growth.

HIMR is named after Hans Heilbronn, a German émigré and distinguished number theorist who became Bristol’s Henry Overton Wills Professor of Mathematics before his move to North America in 1964.

UKRI works in partnerships with universities, research organisations, businesses, charities, and government to create the best possible environment for research and innovation to flourish. It aims to maximise the contribution of each of its component parts, working individually and collectively. It works with many partners to benefit everyone through knowledge, talent, and ideas.