22-Jan-2018 11:05 AM EST, by University of Virginia Darden School of Business
favorite_border 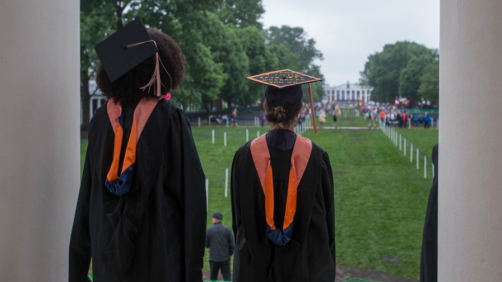 Newswise — With an Ivy League degree to his name and a job on Wall Street, 22-year-old Chris Aguemon’s career prospects are both bright and wide open.

And while the Morgan Stanley investment analyst cannot yet forecast the full arc of his career, he does know where he’ll be roughly four years from now: at the University of Virginia Darden School of Business, enjoying his First Year in the MBA program.

Aguemon is one of the first students to be accepted into Darden’s Future Year Scholars Program, a deferred admissions program aimed at top college seniors or fifth-year master’s degree students. Now in its second year, Darden is expanding the program thanks to the support of a $3 million anonymous gift.

The program seeks to benefit both the applicants and Darden. Applicants like Aguemon receive guaranteed admission to a top MBA program, giving them the confidence to take risks and be bold early in their career, knowing that they have certain next steps secured. Meanwhile, the Darden School widens and strengthens its recruiting funnel, getting on the radar of top college students who might not otherwise be considering an MBA.

There are additional incentives for accepted applicants, as well, including a scholarship of $15,000 per year of study at Darden, eligibility for additional scholarships and early access to the Darden network of over 15,000 alumni, among other benefits.

“It definitely provides you with a sense of comfort knowing you’re admitted,” said Aguemon. “It also puts pressure on you. You can’t just go out and waste the next few years. I want to bring something to school. I don’t want to just show up and not be able to add to the community.”

If the past is any indication, Aguemon will do more than just show up.

Born in Ivory Coast, Aguemon grew up in Virginia and excelled academically from a young age, enrolling in a math and science magnet high school while playing football for his home high school in Loudon County.

Aguemon continued his football career at Dartmouth and committed to the ROTC program as a contracted cadet. He even briefly founded and ran a textbook rental business while not immersed in school work. Although he remains close to the program, Aguemon eventually left football behind to focus on his academics and numerous extracurricular activities as he pursued a government degree.

Aguemon, who hopes to run his own firm one day, said he took the GMAT and began considering MBA early admission programs as college graduation loomed. He was unaware of the Darden Future Year Scholars Program until a friend at UVA alerted him.

“I was looking at where I feel comfortable and where I feel like I have mentors,” Aguemon said. “UVA as a whole presented that to me, and I knew Darden was a phenomenal business school.”

So when the admissions offer came, Aguemon, now also a second lieutenant in the U.S. Army Reserves, did not hesitate to commit.

Darden Senior Associate Director of Admissions Katherine Alford said promising students like Aguemon are ideal candidates for the program, which Darden is introducing to college students across the U.S. and the world.

While still exploring the best recruitment models, Alford said Darden is going to places it had not previously, meeting students who may not be considering an MBA or the Darden School. Assistant Director of Admissions Taylor Fisher recently spent time in Maine at top liberal arts colleges Bowdoin, Bates and Colby, for instance.

Alford said the anonymous donor, a Darden alumna, is particularly interested in creating new paths for women and students with financial need.

“Because of this gift, the program allows us to get in front of college students earlier than we would in the past and explain the value of the MBA,” Alford said. “It is the most versatile graduate degree out there and we can help them think through how it might be part of their future.”

The Future Year Scholars Program was introduced against a backdrop of a decline in the number of students taking the GMAT in recent years. The program is one tool the Darden Admissions team is using to ensure that top young students consider the potential of an MBA during the formative years of their careers.

Although the numbers of admitted students are still modest, Alford said all students admitted into the program have accepted.

While Darden is not the first business school to implement a deferred admissions program, it’s still a novel move, and Alford said other business schools have inquired about the program.

Said Alford, “All schools are looking to be innovative in the ways they build their pipeline, and Darden is eager to tap into the potential of this promising pool.”