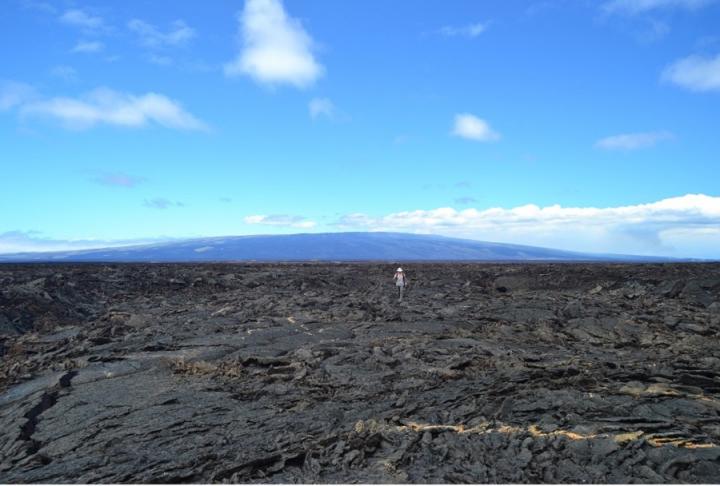 A seismologist returns across lava flows from collecting data on the north flank of Sierra Negra volcano.

Newswise — The study gives the first detailed description of a volcanic eruption from Sierra Negra found on Isla Isabela - the largest of the Galápagos Islands and home to nearly 2,000 people.

The findings, published in Nature Communications, reveal how the volcano inflated and fractured before it erupted and captures a new level of detail for any eruption from a volcano on the islands.

Networks of ground-based seismic and GPS monitoring stations, and satellites, captured data for 13 years before Sierra Negra's eruption, in June 2018.

The surface of the volcano rose during this time, indicating a gradual accumulation of molten rock - known as magma - found in a reservoir under the volcano. The signals were among the largest ever recorded at a volcano of this type, experts say.

The Galápagos Islands have fascinated scientists since Charles Darwin's visit on board the HMS Beagle in 1835. Yet their remote location, in the Pacific Ocean, about 1000km off the Ecuadorian coast, means there were big gaps in scientists' understanding of the volcanic processes that formed them and control their activity.

This eruption provided a rare opportunity to fill some of the gaps, researchers say. An international team, led by the University of Edinburgh, Pennsylvania State University in the US and the Instituto Geofísico in Ecuador, integrated geophysical data with analysis of the chemical composition of the erupted lava. They were supported in doing so by the Parque Nacional Galápagos.

Sierra Negra's eruption continued for nearly two months, spurting out lava flows which extended 10 miles to the island's coast. Fresh earthquakes accompanied the eruption and emptying of the magma reservoir.

After the eruption, the hills within a six-mile wide hollow at the summit of the volcano - known as a caldera - were nearly two meters higher. This phenomenon, known as caldera resurgence, is important for understanding when and where eruptions happen, scientists say. However, it is rare and has never been observed to this extent before.

The team also discovered that the ascending magma permanently uplifted what they call a 'trapdoor' in the floor of the caldera. This raised its surface and, in a complex interplay, triggered large earthquakes that led to the eruption.

The 2018 eruption was a stark reminder of the potential threat to life, livelihoods, and the iconic wildlife of the Galápagos - including the slow moving giant tortoise and land iguana - the researchers said.

This new understanding of volcano behaviour will allow local scientists to track the evolution of volcanic unrest before future eruptions and communicate warnings to local authorities and the public.

Dr Andrew Bell from the University of Edinburgh's School of GeoSciences who led the research, said: "The 2018 eruption of Sierra Negra was a really spectacular volcanic event, occurring in the 'living laboratory' of the Galápagos Islands. Great team work, and a bit of luck, allowed us to capture this unique dataset that provide us with important new understanding as to how these volcanoes behave, and how we might be able to better forecast future eruptions."

Peter La Femina from The Pennsylvania State University in the US, said: "The power of this study is that it's one of the first times we've been able to see a full eruptive cycle in this detail at almost any volcano. We've monitored Sierra Negra from when it last erupted in 2005 through the 2018 eruption and beyond, and we have this beautiful record that's a rarity in itself."

Mario Ruiz from the Instituto Geofísico, the national monitoring agency of Ecuador, said: "Based on constant monitoring of activity of Galapagos volcanoes since 2013, we detected a dramatic increase of seismicity and a steady uplift of crater floor at Sierra Negra. Soon we contacted colleagues from United Kingdom, United States and Ireland and proposed them to work together to investigate the mechanisms leading to an impending eruption of this volcano. This research is an example of international collaboration and partnership."

The research team would like to thank the Instituto Geofísico, Parque Nacional Galápagos, and Charles Darwin Foundation for their support with fieldwork in the Galápagos. The study was funded by NERC, and the NSF.