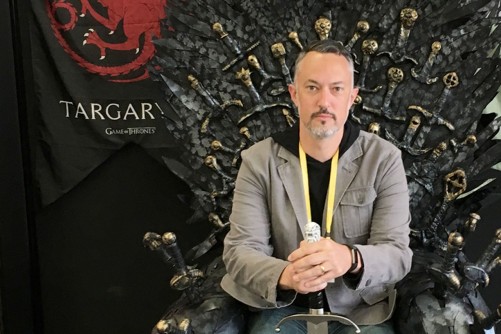 Matthew Gabriele, who has authored three books on the middle ages and his research focuses on religion, violence, nostalgia, and apocalypse in the medieval and modern worlds.

The highly-anticipated seventh season of Game of Thrones kicks off  Sunday, July 16 --  and a Virginia Tech expert says it’s notable how the popular fantasy show has picked up subtle ways women gain power in patriarchal cultures.

“What is interesting about the upcoming season is that, whatever happens, it appears women will be in charge of Westeros, says associate professor Matthew Gabriele, who teaches a Game of Thrones course during the university's winter session.

“The show has consistently picked up subtle ways women gain power in patriarchal cultures. Some examples include Cersei’s rise and Lady Stark’s passing along her strength and resiliency to her daughters, Sansa and Arya. The power of women is largely situational. Queens can lead armies and women could be married off against their will; both are aspects of women’s experience we see in both the Middle Ages and Game of Thrones.”

According to Gabriele, “the show primarily pulls on misconceptions about the Middle Ages from 19th and 20th century culture, not historical events as some have tried to portray.”

“We need to stop asking if Game of Thrones is ‘actually’ medieval and ask why we think it’s medieval? There are some visual cues like swords and stone castles that tie the series to the Middle Ages, but the subtler things - such as the use of British accents and dark sepia filters - play into common misconceptions”

Gabriele has a Ph.D. from the University of California, Berkeley and has authored three books on the middle ages and his research focuses on religion, violence, nostalgia, and apocalypse in the medieval and modern worlds. Visit his bio page here.

He will be available for interviews leading up to and during the shows airing.

To secure an interview, email Ceci Leonard or call 540-357-2500 in the Media Relations office.