13-Sep-2017 10:05 AM EDT, by Perelman School of Medicine at the University of Pennsylvania contact patient services
favorite_border 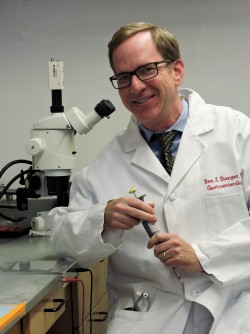 Credit: Perelman School of Medicine at the University of Pennsylvania,

Newswise — PHILADELPHIA — Ben Z. Stanger, MD, PhD, an associate professor of Gastroenterology in the Perelman School of Medicine at the University of Pennsylvania, has been appointed director of the Penn Pancreatic Cancer Research Center (PCRC).

The Center includes a multidisciplinary team of pancreatic cancer experts who care for patients and conduct research on the causes and possible prevention and cure of the disease. The team includes medical oncologists, surgeons, gastroenterologists, radiation oncologists, pathologists, and radiologists. The Center emphasizes personalized medicine, with an aim of providing hope through research to patients diagnosed with this devastating disease.

The PCRC covers a broad range of research, including: understanding the molecular mechanisms of metastasis; defining the barriers to effective anti-cancer immunotherapy; developing new strategies for targeting the tumor stroma to make chemotherapy more effective; how responses to changes in oxygen availability impact development of disease; developing three-dimensional culture methods for more precise modeling of the tumor environment; and searching for new biomarkers of early forms of the disease. It also maintains a portfolio of clinical trials to improve survival and quality of life for patients at all stages of the disease.

Stanger, who previously served as the Center’s scientific director, replaces founding director Robert Vonderheide, MD, DPhil, who is now the director of the Abramson Cancer Center.

Stanger received his MD and a PhD in genetics from Harvard Medical School. He completed his residency in internal medicine at the University of California, San Francisco; a research and clinical fellowship in gastroenterology at Massachusetts General Hospital; and a research fellowship in molecular biology at Harvard University. He was an instructor at Harvard Medical School from 2003 to 2006 before moving to Penn.

Stanger’s research focuses on understanding the cellular and molecular mechanisms of cancer metastasis, particularly of the pancreas and the liver. Notably, the Stanger laboratory, by introducing a fluorescent protein into the genes of cancer-prone mice, traced the lineage of pancreatic cells as a tumor develops. They track these fluorescent cells as they acquire added cancerous features and metastasize to other organs. Their goal is to use this method to understand how tumor cells spread and to learn what makes each individual tumor distinct in order to deliver individualized treatments to patients.