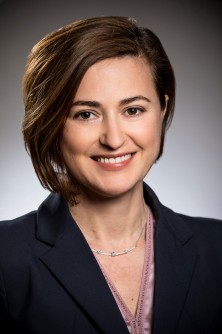 “Pancreatic cancer has a very low survival rate,” said Dr. Alistar. “This is due in part to the fact that it is often discovered in a late stage. Early detection can make a difference.”

Pancreatic cancer is the third leading cause of cancer-related death in the United States, with a five-year survival rate of just seven percent. Fifty-three percent of patients are diagnosed with advanced disease.*

According to the Pancreatic Cancer Action Network, pancreatic cancer may cause only vague, unexplained symptoms. They include:

Pancreatic neuroendocrine tumors, which account for fewer than 5% of all pancreatic cancers, may cause symptoms such as weight loss, nausea, vomiting, muscle weakness and skin rash.

“If you have any of these symptoms, speak with your doctor right away, as it may mean pancreatic cancer.” said Dr. Alistar. “If pancreatic cancer is caught early, before it has spread to the lymph nodes and can be surgically removed, chances of survival increase significantly.”

Who Is At Risk?

While not everyone who gets pancreatic cancer has risks factors, there are certain things that may increase the risk. According to the American Cancer Society, they include: smoking or chewing tobacco; being overweight or obese; workplace exposure to carcinogenic chemicals used in dry cleaning and metal working; age (the risk of getting pancreatic cancer increases at age 45, and the average age at diagnosis is 71); gender (men are slightly more likely to get pancreatic cancer than women); race (African Americans are slightly more likely to get this cancer than whites); family history (some who get pancreatic cancer have a family history of it, but most do not); inherited genetic syndromes (about 10% of all cases are due to genetic mutations); type 2 diabetes; chronic pancreatitis; cirrhosis of the liver; stomach problems (H. pylori infection and excess stomach acid may increase risk, according to some studies); and heavy alcohol use, because it may lead to chronic pancreatitis or cirrhosis, both of which can cause pancreatic cancer.

The diagnosis of pancreatic cancer generally starts with the physician taking a medical history and conducting a physical exam. If pancreatic cancer is suspected, the physician may order medical imaging tests, and possibly refer the patient to a gastroenterologist and order blood tests. If these tests turn up something suspicious, a biopsy may be done or the suspected tumor may be removed and then biopsied.

“Current treatments for late-stage disease may help, but are not optimal,” said Dr. Alistar. “New treatments are urgently needed.”

Dr. Alistar is testing just such a promising treatment. CPI-613 (Rafael Pharmaceuticals) is an advanced, first-in-class drug that offers new hope for people with pancreatic cancer. Dr. Alistar has conducted early-stage clinical trials of this drug, one of which was published in The Lancet Oncology this year and presented at a recent international scientific conference. Starting in early 2018, Dr. Alistar will serve as the Co-Principal Investigator with Philip Philip, MD, PhD of Karmanos Cancer Institute on a planned multi-center Phase III study of CPI-613 in combination with modified FOLFIRINOX, a multidrug treatment for metastatic pancreatic cancer. She has led four other clinical trials of CPI-613 for GI cancers, as well as studies of other novel oncology drugs, and research to determine disease processes and genetic factors in cancers of the gastrointestinal tract.

Dr. Alistar joined Atlantic Health System earlier this year from the Wake Forest School of Medicine, where she led the GI oncology team, bringing cutting-edge treatments to patients. While there, she designed, secured funding for and conducted five investigator-initiated therapeutic clinical trials. She was the Principal Investigator at Wake Forest University of the Precision Oncology study, which is poised to generate new hypotheses in the era of genomic driven clinical trials.

Dr. Alistar is a physician with Atlantic Hematology Oncology at the Carol G. Simon Cancer Center -Morristown Medical Center campus. She is affiliated with Atlantic Medical Group, and is a participating provider in the Atlantic Accountable Care Organization. Dr. Alistar can be reached at 973-971-7960.