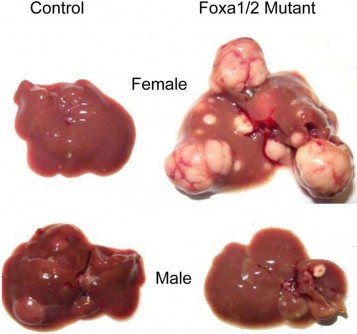 The Foxa factors control liver cancer risk. When mice are exposed to a liver carcinogen, normally male mice develop many tumors, while female mice are protected (left part of the figure). However, in mice lacking the Foxa genes, the situation is reversed (right part of the figure). Thus, the Foxa genes are essential determinants of the sexual dimorphism in liver cancer risk.

Newswise — PHILADELPHIA - Men are four times more likely to develop liver cancer compared to women, a difference attributed to the sex hormones androgen and estrogen. Although this gender difference has been known for a long time, the molecular mechanisms by which estrogens prevent -- and androgens promote -- liver cancer remain unclear.

Now, new research, published in Cell this week from the lab of Klaus Kaestner, PhD, professor of Genetics in the Perelman School of Medicine at the University of Pennsylvania, has found that the difference depends on which proteins the sex hormones bind next to. Specifically a group of transcriptional regulatory proteins called Foxa 1 and 2.

Normally, when mice are given a liver carcinogen, male mice develop many tumors while females get very few. Strikingly, this gender-related incidence of liver cancer was completely reversed in mice genetically engineered by the team to lack the Foxa genes after the team induced cancer. Using complex genomic analyses, the researchers could show that the actions of both estrogens and androgens in the liver are Foxa dependent, explaining the reversal in cancer risk.

But how does this translate to human liver cancer when there are 5,000 places in the human genome where Foxa factors can bind? The team looked for genetic markers called SNPs that intersect with Foxa protein binding. A SNP is a DNA sequence variation occurring when a single nucleotide, or DNA building block, differs between members of a biological species or paired chromosomes in an individual. Knowing that in women the estrogen receptor protects against liver cancer, they looked for SNP markers within Foxa binding sites in tissue samples from women with and without liver cancer.

Strikingly, women with liver cancer frequently had SNPs within specific Foxa binding sites. The researchers then showed that the mutated SNP acts not only to abolish binding of the Foxa proteins, but also of the estrogen receptor to its target sites nearby. This impairment of estrogen receptor binding is thought to result in loss of the protective effect of estrogens, and increased liver cancer risk. Future research will have to determine if the same holds true in reverse in men. In addition, if the human data are validated in larger cohorts of patients, this research might lead to tests for predicting the genetic risk of liver cancer.

This study was funded through the National Institute of Diabetes and Digestive and Kidney Diseases (P01 DK049210).

Penn Medicine is one of the world's leading academic medical centers, dedicated to the related missions of medical education, biomedical research, and excellence in patient care. Penn Medicine consists of the Raymond and Ruth Perelman School of Medicine at the University of Pennsylvania (founded in 1765 as the nation's first medical school) and the University of Pennsylvania Health System, which together form a $4 billion enterprise.

Penn's Perelman School of Medicine is currently ranked #2 in U.S. News & World Report's survey of research-oriented medical schools and among the top 10 schools for primary care. The School is consistently among the nation's top recipients of funding from the National Institutes of Health, with $507.6 million awarded in the 2010 fiscal year.