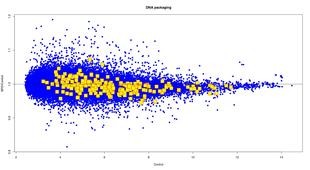 GENE EXPRESSION IN BRONCHOPULMONARY DYSPLASIA. The pattern of blue dots indicates that no individual gene was expressed significantly differently in infants who went on to develop bronchopulmonary dysplasia (BPD) as compared with those who didn't: the dots are as likely to fall above the horizontal line as below it. However, the genes in the chromatin remodeling pathway -- represented by yellow squares -- are significantly more likely to fall below the line, indicating that, as a group, they are "turned on" less often in infants who develop BPD.

Newswise — Some 20 to 40 percent of extremely premature infants suffer abnormal lung development leading to bronchopulmonary dysplasia, a chronic lung disease that can cause long-term breathing problems. Little is known about how to predict whether a premature infant will develop BPD in the weeks after birth, much less how to prevent or treat it. Now, gene-chip studies of these tiny babies' umbilical cords provide unexpected, much-needed leads into predicting and treating this debilitating condition.

The study " one of the first uses of gene-chip (microarray) analysis to study diseases of premature newborns " was led by Isaac Kohane, MD, PhD, director of the Children's Hospital Informatics Program (CHIP), based at Children's Hospital Boston and affiliated with Harvard Medical School and the Harvard-MIT Division of Health Sciences and Technology, and Jennifer Cohen, MD, a neonatology fellow at Children's. Findings will appear online in Genome Biology (http://genomebiology.com) on October 4.

Kohane, Cohen and colleagues obtained samples from the umbilical cords of 54 surviving infants born at less than 28 weeks' gestation and analyzed the activity of all 30,000-odd genes for each infant. The specimens were collected as part of the Extremely Low Gestational Age Newborn (ELGAN) study (http://www.elganstudy.org/), a national study of infants born more than three months early. Twenty of the 54 infants developed BPD after birth; the other 34 did not.

"In the infants who went on to have BPD, we were surprised and intrigued to find a difference in a biochemical pathway that's also disrupted in adult chronic obstructive pulmonary disease (COPD)," says Kohane, the study's senior author.

The pathway, known as the chromatin remodeling pathway, is responsible for the "unwrapping" of coiled strands of DNA, which must occur before a gene can act or be "expressed." When it is disrupted, certain genes for inflammatory proteins get stuck "on," and the inflammation makes lung tissue degenerate and scar, Kohane explains. (Although the lungs are uniquely vulnerable, he speculates that other tissues in the newborn are also affected.)

The pathway has also been shown to be involved in COPD, the collective term for chronic bronchitis and emphysema, which obstruct airflow and make breathing difficult. A group of drugs known as histone deacetylase inhibitors are directed at this pathway, and are being developed as a treatment for COPD(1). Kohane speculates that they might also prevent or treat BPD.

"If you can prevent that pathway from being switched on and chewing away the lung, you might prevent BPD and perhaps improve the rocky clinical course of premature newborns," he says.

In addition, interrupting this inflammatory process might not only slow or halt infants' progression to BPD directly, but could also avoid the need for them to be on the ventilator for prolonged periods, notes Cohen, the study's first author. Very premature infants usually require mechanical ventilation to stay alive " yet this life-saving measure ironically contributes to the development of BPD.

"This is just the first stage, but if we can target a therapy we can use right when the babies are born, we could limit time on the ventilator and actually prevent disease rather than just treating it," says Cohen, now a neonatologist at Brigham and Women's Hospital (BWH) in Boston.

Interestingly, the researchers didn't find any particular gene to have a different pattern of activity in the infants with BPD. "No single gene turned 'on' or 'off' in a statistically different way between the two groups," says Kohane. "We thought perhaps the study had not worked " until we realized that it might be an entire pathway that is differentially expressed."

He cautions, however, that a larger sample size is needed to validate the genetic findings as a reliable predictor of BPD in premature infants. To confirm the results, Cohen and colleagues at BWH will do follow-up studies with additional umbilical cord samples, and will also look at gene expression in cells from lung fluid to see if expression differs over time.

Corroborating other studies, Kohane and Cohen also found that infants born at younger gestational ages (whether or not they developed BPD) had reduced activity of pathways involved in converting nutrients into energy, a possible explanation for why premature infants require high-calorie intravenous feeding after birth.

Finally, the study validates the hypothesis that the umbilical cord makes a good proxy for studying fetal lung physiology. Unlike lung tissue, umbilical cord tissue is readily available to researchers, contains stem cells for many fetal tissues, and appears to reflect the physiology of the fetus and the intrauterine environment.

The study was funded by the National Institutes of Health and Robert P. and Judith N. Goldberg Foundation. Citation is as follows:

Children's Hospital Boston is home to the world's largest research enterprise based at a pediatric medical center, where its discoveries have benefited both children and adults since 1869. More than 500 scientists, including eight members of the National Academy of Sciences, 11 members of the Institute of Medicine and 10 members of the Howard Hughes Medical Institute comprise Children's research community. Founded as a 20-bed hospital for children, Children's Hospital Boston today is a 377-bed comprehensive center for pediatric and adolescent health care grounded in the values of excellence in patient care and sensitivity to the complex needs and diversity of children and families. Children's also is the primary pediatric teaching affiliate of Harvard Medical School.