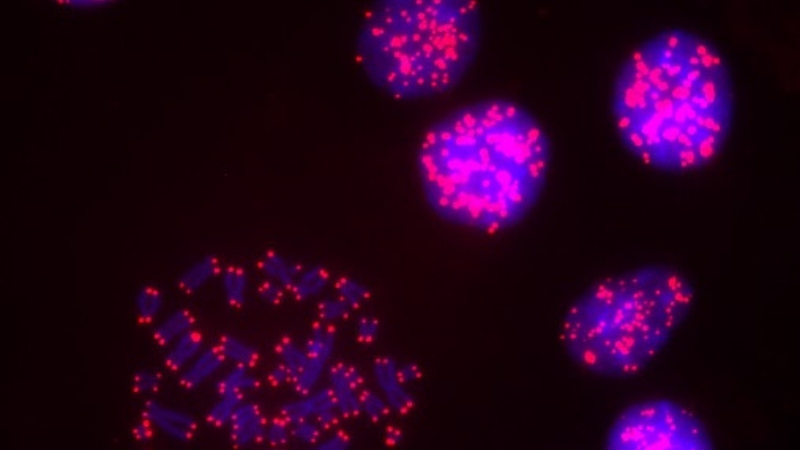 Image of human telomeres in cells. Each telomere is shown by red dots in resting nuclei of cells (circles) and cells that are dividing (separated linear chromosomes).

Newswise — By combing through the entire genetic sequences of a person with a lung scarring disease and 13 of the person’s relatives, Johns Hopkins Medicine researchers say they have found a coding error in a single gene that is likely responsible for a rare form of the disease and the abnormally short protective DNA caps on chromosomes long associated with it.

The error was found in the DNA sequence of the gene ZCCHC8, and it decreases by half the production of a protein needed to keep those caps — called telomeres — at a critical length, say the researchers. The finding, they add, means the flaw likely will become part of a small but growing list of diagnostic markers for so-called short telomere syndromes.

A report on the work, which focused on the disease known as idiopathic pulmonary fibrosis (IPF) was published online Sept. 5 in the journal Genes & Development.

“Combining clinical and molecular approaches can be very powerful in efforts to understand the cause of genetic disease and its biology,” says Mary Armanios, M.D., professor of oncology at the Johns Hopkins Kimmel Cancer Center and clinical director of the Telomere Center at Johns Hopkins. “We’re finding that there are many gene pathways that can disturb telomere length regulation.” Over the past 15 years, Armanios has identified five of seven telomere-related genetic errors in families with pulmonary fibrosis. Now, there is an eighth, she says.

IPF occurs in approximately 100,000 people in the U.S., says Armanios, and creates lung scarring not attributed to smoking or other environmental factors. An estimated one in five people with IPF are thought to have a hereditary form of the disease, and half of those cases are linked to an inherited tendency for very short telomeres.

Telomeres protect the ends of chromosomal DNA like the plastic tubes on the ends of shoelaces, and they normally shorten with aging. Made up of repetitive sequences of DNA, normal telomeres have enough length to withstand the erosion that occurs over a normal lifespan. However, some people are born with abnormally short telomeres, causing problems with the cells’ ability to divide and multiply, and leading to an assortment of disorders including IPF, bone marrow failure, some forms of liver disease and cancers of the bone marrow called myelodysplastic syndromes.

In previous research, Armanios showed that knowing whether a person with IPF has short telomeres is important to choose the right therapy. If short telomeres are involved, treatments for some disorders should include reduced doses of chemotherapy before bone marrow transplants, less use of immunosuppressant drugs, and use of lung and bone marrow transplant donors who don’t have telomere-related genetic errors.

The gene errors that run in families with IPF are generally rare among populations, so they are difficult to pinpoint, says Armanios. “It’s like looking for the proverbial needle in the haystack,” she says. So, the researchers have to break the haystack apart and study the genetics of individual families to find the hereditary culprits.

To find the eighth mutation, they performed whole genome sequencing to examine the DNA sequences of a patient with IPF and 13 of the person’s relatives. First, they found that some of the family members had low levels of telomerase RNA component, or TR. It’s one of two biochemical pieces of telomerase, the enzyme that lengthens telomeres. With less TR, less telomerase is available to maintain, restore, and repair the DNA end caps.

Next, the researchers compared variations among the entire genome between family members with low TR levels and those with normal levels. Among the altered areas of DNA in family members with low TR levels, Armanios and her team narrowed their search to a section of DNA on chromosome 12 that is 17 million basepairs long (out of 3 billion basepairs in the human genome). Within this region, the gene ZCCHC8 had not previously been known to have functions related to telomere maintenance.

However, Armanios and her team measured the protein made by the error-containing ZCCHC8 gene and found that family members with low TR levels had half the amount of ZCCHC8 protein compared with family members who had normal TR amounts.

To determine the ZCCHC8 protein’s function, Armanios’ team used the gene editing technology CRISPR in human cells and mice to find that the protein typically trims the tail ends of TRs so that they can mature and function as part of telomerase. But cells and mice lacking ZCCHC8 have extra amounts of untrimmed TRs, resulting in a shorter version of the molecule that can no longer become part of telomerase.

Armanios says the findings could potentially reveal a way to develop therapies that restore the balance of TRs in cells to help with telomerase function.

Currently, physicians who suspect a person has a short telomere syndrome can undergo telomere length and genetic testing that includes the seven previously identified gene errors. Armanios says the ZCCHC8 gene error will be added to the diagnostic gene test.

“We’ve gone from knowing only a few gene errors associated with a small percentage of IPF cases a decade ago to understanding what contributes to more than a third of the families whose IPF gene had not been characterized and nearly 10% of other IPF cases,” says Armanios.