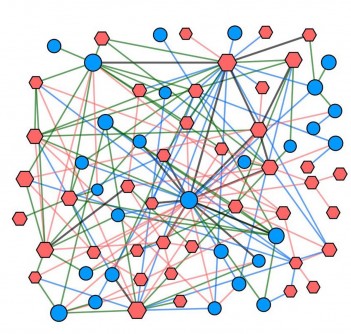 Newswise — Genetic mutations that cause cancer also weaken cancer cells, creating an opportunity for researchers to develop drugs that will selectively kill them, while sparing normal cells. This concept is called “synthetic lethality” because the drug is only lethal to mutated (synthetic) cells. Researchers at UC San Diego School of Medicine and Jacobs School of Engineering developed a new method to search for synthetic-lethal gene combinations.

“The ovarian cancer drug olaparib works by synthetic lethality — it inhibits a gene that, when a BRCA gene is also mutated, kills just those cancer cells,” said John Paul Shen, MD, clinical instructor and postdoctoral fellow at UC San Diego School of Medicine and Moores Cancer Center. “Many other cancers could likely be treated this way as well, but we don’t yet know which gene mutation combinations will be synthetic-lethal.” Shen was co-first author of the study, along with Dongxin Zhao, PhD, postdoctoral fellow at UC San Diego Jacobs School of Engineering, and Roman Sasik, PhD, computational biologist in the UC San Diego School of Medicine.

To overcome this limitation, the team developed a new method that uses the gene editing technique CRISPR/Cas9 to simultaneously test for thousands of synthetic-lethal interactions. CRISPR/Cas9 works like this: researchers design a “guide” RNA to match the sequence of a specific target gene in a cell. The RNA guides the Cas9 enzyme to the desired spot, where it cuts the DNA. The cell can repair the DNA break, but it does so imprecisely, thereby inactivating the gene.

In this study, the researchers designed a CRISPR/Cas9 system with two guide RNAs: 1) one that targets a tumor suppressor gene that is commonly mutated in cancer and 2) one that targets a gene that could also be disrupted by a cancer drug. They deployed this system against 73 genes in three laboratory cell lines — human cervical cancer, lung cancer and embryonic kidney cells — for a total of 150,000 gene combinations. Then they measured cell growth and death.

“Identifying underlying genetic interactions in this way can reveal important functional relationships between genes, such as contributions to the same protein complex or pathway,” co-senior author Trey Ideker, PhD, professor in the UC San Diego School of Medicine, founder of the UC San Diego Center for Computational Biology and Bioinformatics and co-director of the Cancer Cell Map Initiative. “This in turn can impact both our fundamental understanding of biological systems, as well as therapeutics development.”

“Moving forward, we intend to further refine our technology platform and make it more robust,” said co-senior author Prashant Mali, PhD, assistant professor in the Jacobs School of Engineering at UC San Diego. “And we are scaling our cancer genetic networks maps so we can systematically identify new combination therapies.”