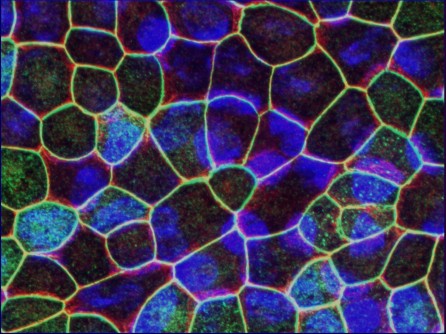 Newswise — Researchers at the National Institutes of Health have developed a technique that will speed up the production of stem-cell derived tissues. The method simultaneously measures the expression of multiple genes, allowing scientists to quickly characterize cells according to their function and stage of development. The technique will help the researchers in their efforts to use patients’ skin cells to regenerate retinal pigment epithelium (RPE)—a tissue in the back of the eye that is affected in several blinding eye diseases. It will also help the scientists search for drugs for personalized treatments. “Progress in stem cell-based therapies has been limited by our capacity to authenticate cells and tissues,” said Kapil Bharti, Ph.D., a Stadtman Investigator in the Unit on Ocular and Stem Cell Translational Research at the National Eye Institute (NEI), a part of NIH. “This assay expands that capacity and streamlines the process.” The assay was described in a recent issue of Stem Cells Translational Medicine.

The RPE is a single layer of cells that lies adjacent to the retina, where the light-sensitive photoreceptors commonly called rods and cones are located. The RPE supports photoreceptor function. Several diseases cause the RPE to break down, which in turn leads to the loss of photoreceptors and vision.

The stem cells Dr. Bharti is using to make RPE are induced pluripotent (iPS) stem cells, which are produced by reverting mature cells to an immature state, akin to embryonic stem cells. iPS cells can be derived from a patient’s skin or blood cells, coaxed into other cell types (such as neurons or muscle), and in theory, re-implanted without causing immune rejection.

To verify the identity of RPE made from iPS cells, scientists use microscopy to ensure the tissue looks like RPE and physiological assays to ensure the tissue behaves like RPE. They also use a technique called quantitative RT-PCR to measure the expression of genes that indicate ongoing cell development and function. For example, expression of the gene SOX2 is much higher in iPS cells than mature RPE.

But quantitative RT-PCR only permits the simultaneous measurement of a few genes per sample. Dr. Bharti teamed up with Marc Ferrer, Ph.D., of NIH’s National Center for Advancing Translational Sciences (NCATS) to develop a multiplex assay—a method for simultaneously measuring multiple genes per RPE sample in a highly automated fashion. The assay is based on a commercially available platform from the biotech company Affymetrix. In the assay, tiny snippets of DNA tethered to beads are used to capture RNA molecules—created when genes are expressed by cells in the RPE sample. Once captured, the RNA from distinct genes is labeled with a fluorescent tag.

Starting with cells from a skin biopsy, the researchers generated iPS-derived RPE and then measured the expression of eight genes that are markers of development, function, and disease. They measured RNA levels of each gene one at a time using quantitative RT-PCR and then all genes simultaneously using the multiplex assay. When compared, the results correlated.

“This report demonstrates proof of principle that relevant gene expression changes in iPS-derived RPE can be measured with confidence using a fully automated, high-throughput assay,” said Dr. Bharti. Once they had the assay working, the researchers halved its cost and increased its output by using fewer cells and smaller solution volumes.

Dr. Bharti and colleagues at NEI are collaborating with the New York Stem Cell Foundation to produce iPS cell lines from patients with age-related macular degeneration (AMD)—the most common cause of vision loss among older Americans—and from other patients with rare hereditary eye diseases. These iPS cell lines will be available to the entire scientific community through a central repository. Dr. Bharti will generate RPE from these cell lines to study AMD.

The multiplex assay will be used as a quality check on the cells, and for screening the effects of potentially therapeutic compounds. It will also help refine production of RPE for cell therapy. With a Therapeutic Challenge Award from the NIH Common Fund, Dr. Bharti is leading efforts toward a clinical trial of iPS-derived RPE for AMD. The trial will test whether replacing damaged RPE with RPE from patients’ own cells can prevent AMD-related vision loss.

The study was funded by the NEI Intramural Research Program, the NIH Common Fund, and NIH grant U54 MH084681.

More information about Dr. Bharti’s research, including a video, is available on the NIH Intramural Research Program’s website.

NEI leads the federal government's research on the visual system and eye diseases. NEI supports basic and clinical science programs that result in the development of sight-saving treatments. For more information, visit http://www.nei.nih.gov.

NCATS is a distinctly different entity in the research ecosystem. Rather than targeting a particular disease or fundamental science, NCATS focuses on what is common across diseases and the translational process. The Center emphasizes innovation and deliverables, relying on the power of data and new technologies to develop, demonstrate and disseminate improvements in translational science that bring about tangible improvements in human health. For more information, visit http://www.ncats.nih.gov.