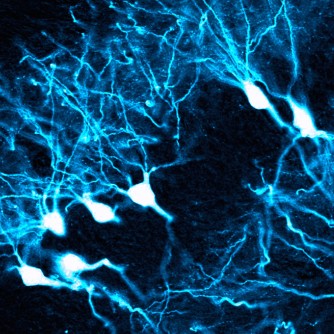 Newswise — CHAPEL HILL, NC – Gene therapies promise to revolutionize the treatment of many diseases, including neurological diseases such as ALS. But the small viruses that deliver therapeutic genes can have adverse side effects at high doses. UNC School of Medicine researchers have now found a structure on these viruses that makes them better at crossing from the bloodstream into the brain – a key factor for administering gene therapies at lower doses for treating brain and spinal disorders.

“This structural ‘footprint’ we found seems to help these viruses get efficiently into the brain, which informs the design of potentially safer brain-targeted gene therapies,” said study senior author Aravind Asokan, PhD, associate professor of genetics.

The study, published in Molecular Therapy, examined adeno-associated viruses (AAVs), the most commonly used virus vectors for delivering gene therapies. The natural forms of these small viruses normally infect people without causing disease. For gene therapies, scientists remove most of the AAV genome, replace it with therapeutic genetic cargo, and inject trillions of copies into the patient.

In principle, scientists can modify AAVs to infect some cell types more than others to deliver their therapeutic payloads where they are most needed. However, most AAVs cannot easily cross from the bloodstream into the brain. Like most other viruses, they tend to be blocked by the cells that tightly line brain capillaries to form the so-called blood-brain barrier.

“To achieve therapeutic effects in the brain, AAVs sometimes have to be given in high doses, which raises the possibility of dose-dependent toxicity,” said first author Blake Albright, a graduate research assistant at UNC.

In this way they isolated a closely spaced set of just eight amino acids on the viral coating that confers the ability to cross the blood-brain barrier efficiently. “Grafting that structural footprint onto another AAV strain enables it to cross into the brain much more easily,” Albright said.

The finding suggests that other AAVs used for a gene therapy targeting the brain or spinal cord might be improved by having the same or a similar set of amino acids. It would cross the blood-brain barrier more efficiently, and thus in principle would require a smaller dose to achieve therapeutic effects in the brain.

A smaller AAV dose would in itself mean a smaller chance of adverse side effects. But the UNC scientists found another potential safety benefit. Compared to their parental strains, AAV variants containing the key set of amino acids were less likely to get into other, non-brain cells, including liver cells. Transient liver toxicity is a significant concern in gene therapy, when high doses are required.

“We also found that our AAV variants containing this key amino acid footprint preferentially get into neurons rather than other brain cell types,” Asokan said. “This could be particularly useful for some gene therapies that target the brain.”

Gene therapies against neurological diseases are under investigation in clinical and preclinical trials, and include therapies for ALS, Huntington’s disease, Spinal Muscular Atrophy, Friedrich’s ataxia, and other disorders.

The UNC researchers are now trying to determine the precise molecular details of how the set of AAV amino acids allows the viruses to cross the blood-brain barrier. They are also studying how structures that enable blood-brain barrier crossing might differ from one animal species to another.