Gene Therapy Restores Hearing in Deaf Mice… Down to a Whisper 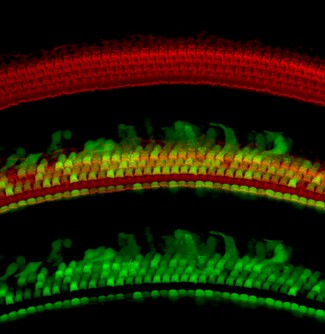 A better gene therapy vector: The synthetic Anc80L65 vector effectively penetrates both the inner and outer hair cells of the cochlea in mice injected after birth. The top image is stained red to show the hair cells alone. The middle image adds green to show hair cells taking up the vector (carrying a gene for green fluorescent protein). The bottom image shows all cells that took up the vector. 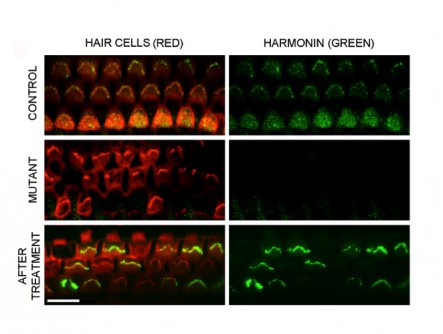 Restoring balance: In this open field test, mice were allowed to explore while the track beneath them recorded their path. These images, recorded over 2 ½ minutes, show that normal mice stay mainly at the periphery of the circular field. The mutant mice show repeated circling behavior indicating their lack of equilibrium. In the third panel, the mutant mice resume a near-normal pattern when treated with gene therapy.

Newswise — In the summer of 2015, a team at Boston Children’s Hospital and Harvard Medical School reported restoring rudimentary hearing in genetically deaf mice using gene therapy. Now the Boston Children’s research team reports restoring a much higher level of hearing — down to 25 decibels, the equivalent of a whisper — using an improved gene therapy vector developed at Massachusetts Eye and Ear.

The new vector and the mouse studies are described in two back-to-back papers in Nature Biotechnology (published online February 6).

“We have shown that Anc80 works remarkably well in terms of infecting cells of interest in the inner ear,” says Stankovic, an otologic surgeon at Mass. Eye and Ear and associate professor of otolaryngology at Harvard Medical School. “With more than 100 genes already known to cause deafness in humans, there are many patients who may eventually benefit from this technology.” The second study, led by Gwenaëlle Géléoc, PhD, of the Department of Otolaryngology and F.M. Kirby Neurobiology Center at Boston Children’s, used Anc80 to deliver a specific corrected gene in a mouse model of Usher syndrome, the most common genetic form of deaf-blindness that also impairs balance function.

“This strategy is the most effective one we’ve tested,” Géléoc says. “Outer hair cells amplify sound, allowing inner hair cells to send a stronger signal to the brain. We now have a system that works well and rescues auditory and vestibular function to a level that’s never been achieved before.”

Ushering in gene therapy for deafness

Géléoc and colleagues at Boston Children’s Hospital studied mice with a mutation in Ush1c, the same mutation that causes Usher type 1c in humans. The mutation causes a protein called harmonin to be nonfunctional. As a result, the sensory hair cell bundles that receive sound and signal the brain deteriorate and become disorganized, leading to profound hearing loss.

When a corrected Ush1c gene was introduced into the inner ears of the mice, the inner and outer hair cells in the cochlea began to produce normal full-length harmonin. The hair cells formed normal bundles (see images) that responded to sound waves and signaled the brain, as measured by electrical recordings.

Most importantly, deaf mice treated soon after birth began to hear. Géléoc and colleagues showed this first in a “startle box,” which detects whether a mouse jumps in response to sudden loud sounds. When they next measured responses in the auditory regions of the brain, a more sensitive test, the mice responded to much quieter sounds: 19 of 25 mice heard sounds quieter than 80 decibels, and a few could heard sounds as soft as 25-30 decibels, like normal mice.

“Now, you can whisper, and they can hear you,” says Géléoc, also an assistant professor of otolaryngology at Harvard Medical School.

Margaret Kenna, MD, MPH, a specialist in genetic hearing loss at Boston Children’s who does research on Usher syndrome, is excited about the work. “Anything that could stabilize or improve native hearing at an early age would give a huge boost to a child’s ability to learn and use spoken language,” she says. “Cochlear implants are great, but your own hearing is better in terms of range of frequencies, nuance for hearing voices, music and background noise, and figuring out which direction a sound is coming from. In addition, the improvement in balance could translate to better and safer mobility for Usher Syndrome patients.”

Since patients (and mice) with Usher 1c also have balance problems caused by hair-cell damage in the vestibular organs, the researchers also tested whether gene therapy restored balance. It did, eliminating the erratic movements of mice with vestibular dysfunction (see images) and, in another test, enabled the mice to stay on a rotating rod for longer periods without falling off.

Further work is needed before the technology can be brought to patients. One caveat is that the mice were treated right after birth; hearing and balance were not restored when gene therapy was delayed 10-12 days. The researchers will do further studies to determine the reasons for this. However, when treated early, the effects persisted for at least six months, with only a slight decline between 6 weeks and 3 months. The researchers also hope to test gene therapy in larger animals, and plan to develop novel therapies for other forms of genetic hearing loss.

Usher syndrome also causes blindness by causing the light-sensing cells in the retina to gradually deteriorate. Although these studies did not test for vision restoration, gene therapy in the eye is already starting to be done for other disorders.

“We already know the vector works in the retina,” says Géléoc, “and because deterioration is slower in the retina, there is a longer window for treatment.”

“Progress in gene therapy for blindness is much further along than for hearing, and I believe our studies take an important step toward unlocking a future of hearing gene therapy,” says Vandenberghe, also an assistant professor of ophthalmology at Harvard Medical School. “In the case of Usher syndrome, combining both approaches to ultimately treat both the blinding and hearing aspects of disease is very compelling, and something we hope to work toward.”

“This is a landmark study,” says Holt, director of otolaryngology research at Boston Children’s Hospital, who was also a co-author on the second paper. “Here we show, for the first time, that by delivering the correct gene sequence to a large number of sensory cells in the ear, we can restore both hearing and balance to near-normal levels.”

Bifeng Pan, Charles Askew and Alice Galvin of Boston Children’s were co-first authors on the study led by Géléoc. Lukas Landegger of Mass. Eye and Ear, Pan, and Askew were co-first authors on the study of the vector. The work was supported by the Bertarelli Foundation, the Kidz-b-Kidz Foundation, the Foundation Fighting Blindness, the Jeff and Kimberly Barber Gene Therapy Research Fund and the Manton Center for Orphan Disease Research at Boston Children’s Hospital. Luk Vandenberghe is an inventor on Anc80 (patent #WO/2015/054653) and other gene transfer technologies, for which he receives royalties. These technologies are licensed to several gene therapy companies, some of which fund research in Vandenberghe’s laboratory (Selecta Biosciences and Lonza Houston).

About Massachusetts Eye and Ear Mass. Eye and Ear clinicians and scientists are driven by a mission to find cures for blindness, deafness and diseases of the head and neck. Now united with Schepens Eye Research Institute, Mass. Eye and Ear is the world's largest vision and hearing research center, developing new treatments and cures through discovery and innovation. Mass. Eye and Ear is a Harvard Medical School teaching hospital and trains future medical leaders in ophthalmology and otolaryngology, through residency as well as clinical and research fellowships. Internationally acclaimed since its founding in 1824, Mass. Eye and Ear employs full-time, board-certified physicians who offer high-quality and affordable specialty care that ranges from the routine to the very complex. In the 2016–2017 “Best Hospitals Survey,” U.S. News & World Report ranked Mass. Eye and Ear #1 in the nation for ear, nose and throat care and #1 in the New England for eye care. For more information about life-changing care and research, or to learn how you can help, please visit MassEyeAndEar.org. 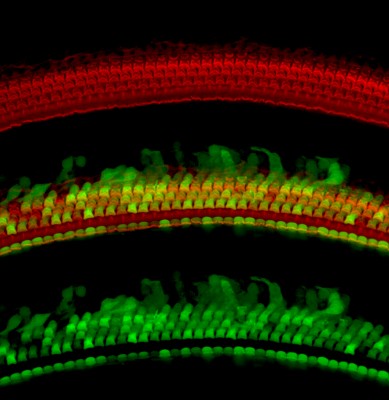 Caption: A better gene therapy vector: The synthetic Anc80L65 vector effectively penetrates both the inner and outer hair cells of the cochlea in mice injected after birth. The top image is stained red to show the hair cells alone. The middle image adds green to show hair cells taking up the vector (carrying a gene for green fluorescent protein). The bottom image shows all cells that took up the vector. 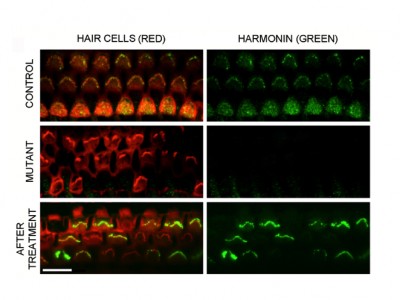 Caption: Restoring balance: In this open field test, mice were allowed to explore while the track beneath them recorded their path. These images, recorded over 2 ½ minutes, show that normal mice stay mainly at the periphery of the circular field. The mutant mice show repeated circling behavior indicating their lack of equilibrium. In the third panel, the mutant mice resume a near-normal pattern when treated with gene therapy.