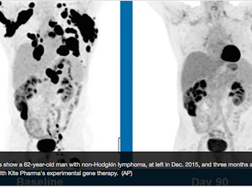 Newswise — An experimental gene therapy that turns a patient's own blood cells into cancer killers worked in a major study, with more than one-third of very sick lymphoma patients showing no sign of disease six months after a single treatment, its maker said Tuesday.

In all, 82 percent of patients had their cancer shrink at least by half at some point in the study.

Its sponsor, California-based Kite Pharma, is racing Novartis AG to become the first to win approval of the treatment, called CAR-T cell therapy, in the U.S. It could become the nation's first approved gene therapy.

A hopeful sign: the number in complete remission at six months — 36 percent — is barely changed from partial results released after three months, suggesting this one-time treatment might give lasting benefits for those who do respond well.