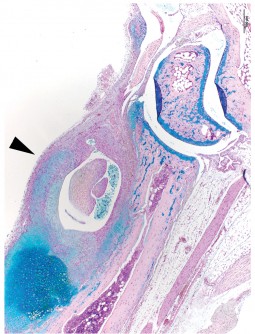 Newswise — (SALT LAKE CITY)—University of Utah researchers have discovered a naturally occurring genetic variation in mice that predisposes carriers toward developing severe, inflammatory arthritis. The finding implicates a new class of genes in arthritis progression, potentially opening doors to new treatment options. The study will be published ahead of print on Dec. 16 in the online issue of The Journal of Clinical Investigation.

Among individuals with inflammatory arthritis, the severity of symptoms, which include joint swelling, pain, and stiffness, varies greatly. The phenomenon is readily apparent among patients of Lyme disease, caused by a bacterial infection that is transmitted by ticks. Despite antibiotic treatment, up to 10 percent of patients will develop chronic Lyme arthritis.

“We were hoping to identify genes and physiological pathways responsible for the differences in arthritis severity, with an eventual goal of identifying potential therapeutic interventions,” says Janis Weis, Ph.D., U of U professor of pathology and senior author on the study.

Weis’ investigation began after learning that, similar to what is observed in people, a strain of mice called C3H develops severe arthritis with Lyme disease, while a different strain, B6, develops mild symptoms. Because the mice are highly inbred, mice in each strain are near genetic carbon copies of one another. This feature has allowed her group to cross the two strains, progressively narrowing down regions of C3H DNA that confer arthritis susceptibility in offspring.

A result 20 years in the making, her group arrived at a single base pair change, or polymorphism, in the gene - glucuronidase (Gusb) that they call Gusbh. Gusbh mice not only develop severe arthritis symptoms in response to Lyme disease, but also to a rheumatoid arthritis-like condition. This finding implicates that the protein encoded by Gusb is a contributor to two types of inflammatory arthritis, expanding the potential impact to a larger group of arthritis patients.

The GUSB protein is an enzyme that resides in the lysosome, often considered the “stomach” of the cell. There, the enzyme breaks down complex carbohydrates called glycosaminoglycans (GAGs).

Until now, there were no clues as to how this type of protein might regulate arthritis progression. “All we knew is that Gusb is a housekeeping gene that carries out the nuts and bolts activities in the cell,” says Kenneth Bramwell, Ph.D., postdoctoral fellow Weis’ lab and lead author on the study. “We had our work cut out for us.”

The study shows that Gusbh causes an amino acid change that lowers the enzymatic activity of the protein by up to 90 percent. Consistent with the observation, GAGs fail to be broken down in Gusbh mice with inflammatory arthritis, and accumulate at sites of inflammation. These findings suggest that the build-up of GAGs is a contributing factor to the development of severe arthritis.

“These [GAGs] may be activating the innate immune response. That’s one possibility. It could be that GAGs are deposited in response to this infection and that that contributes to a more severe disease trajectory,” says Bramwell. Future studies will focus on understanding the mechanism, with the intention of identifying new ways to halt disease progression.

This is the first time that a lysosomal storage enzyme has been implicated in the development of arthritis. The discovery reveals the possibility that GUSB or the 40 other members of this class of proteins may also be involved in the progression of arthritis in people.

“The doctors that we’ve spoken to who have familiarity with rheumatoid arthritis are quite excited by these findings,” says Bramwell.