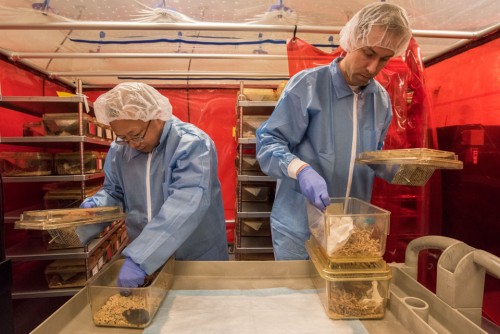 Berkeley Lab staff scientist Jian-Hua Mao (left) and research scientist Antoine Snijders handle some of the mice used in the research study on how early environmental exposure plays a big role in shaping the "signature" of the gut microbiome. 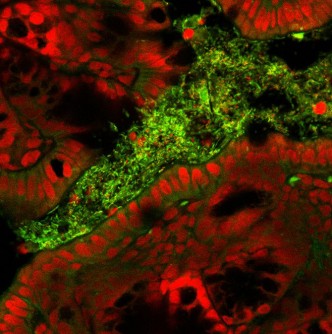 The nuclei of mouse epithelial cells (red) and the microbes (green) in the mouse intestine are visible.

Mice raised in built environments with different relative abundances of diverse microbes (left and right) have a correspondingly diverse gut microbiome. These signature characteristics remained even when the mice were moved to a new facility, and they persisted into the next generation.

Newswise — Genetics and birthplace have a big effect on the makeup of the microbial community in the gut, according to research to be published Monday, Nov. 28, in the journal Nature Microbiology.

The findings by a team of scientists from the Department of Energy’s Pacific Northwest National Laboratory (PNNL) and Lawrence Berkeley National Laboratory (Berkeley Lab) represent an attempt to untangle the forces that shape the gut microbiome, which plays an important role in keeping us healthy.

In the study, scientists linked specific genes in an animal—in this case, a mouse—to the presence and abundance of specific microbes in its gut.

“We are starting to tease out the importance of different variables, like diet, genetics, and the environment, on microbes in the gut,” said PNNL’s Janet Jansson, a corresponding author of the study. “It turns out that early life history and genetics both play a role.”

Scientists studied more than 50,000 genetic variations in mice and ultimately identified more than 100 snippets that affect the population of microbes in the gut. Some of those genes in mice are very similar to human genes that are involved in the development of diseases like arthritis, colon cancer, Crohn’s disease, celiac disease, and diabetes.

The abundance of one microbe in particular, a probiotic strain of Lactobacillales, was affected by several host genes and was linked to higher levels of important immune cells known as T-helper cells. These results support the key role of the microbiome in the body’s immune response, and suggest the possibility that controlling the microbes in the gut could influence the immune system and disease vulnerability.

“We know the microbiome likely plays an important role in fighting infections,” said first author Antoine Snijders of Berkeley Lab. “We found that the level of T-helper cells in the blood of mice is well explained by the level of Lactobacillales in the gut. It’s the same family of bacteria found in yogurt and very often used as a probiotic.”

To do the research, the team drew upon a genetically diverse set of “collaborative cross” mice that capture the genetic variation in human populations. Scientists studied 30 strains of the mice, which were housed in two facilities with different environments for the first four weeks of their lives. The scientists took fecal samples from the mice to characterize their gut microbiomes before transferring them to a third facility.

The researchers found that the microbiome retained a clear microbial signature formed where the mice were first raised—effectively their “hometown.” Moreover, that microbial trait carried over to the next generation, surprising the scientists.

“The early life environment is very important for the formation of an individual’s microbiome,” said Jian-Hua Mao, a corresponding author from Berkeley Lab. “The first dose of microbes one gets comes from the mom, and that remains a strong influence for a lifetime and even beyond.”

In brief, the team found that:• Both genetics and early environment play a strong role in determining an organism’s microbiome• The genes in mice that were correlated to microbes in the gut are very similar to genes that are involved in many diseases in people

The researchers also found indications that moderate shifts in diet play a role in determining exactly what functions the microbes carry out in the gut.

“Our findings could have some exciting implications for people’s health,” said Jansson. “In the future, perhaps people could have designer diets, optimized according to their genes and their microbiome, to digest foods more effectively or to modulate their susceptibility to disease.”

Other co-lead authors on this paper are Sasha Langley from Berkeley Lab and Young-Mo Kim from PNNL. Thomas Metz at PNNL is also a co-corresponding author. The study also included work by scientists at the University of Washington.

The research was funded primarily by the Office of Naval Research. Additional funding came from Berkeley Lab’s Microbes to Biomes and PNNL’s Microbiomes in Transition initiatives.

The mice were created at the Systems Genetics Core Facility at the University of North Carolina. The team made metabolomic measurements at EMSL, the Environmental Molecular Sciences Laboratory, a DOE Office of Science User Facility at PNNL. 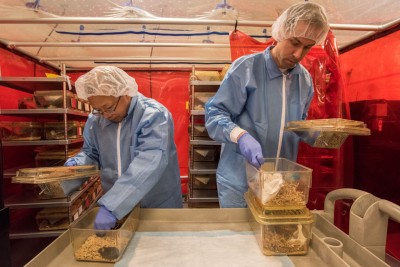 Caption: Berkeley Lab staff scientist Jian-Hua Mao (left) and research scientist Antoine Snijders handle some of the mice used in the research study on how early environmental exposure plays a big role in shaping the "signature" of the gut microbiome. 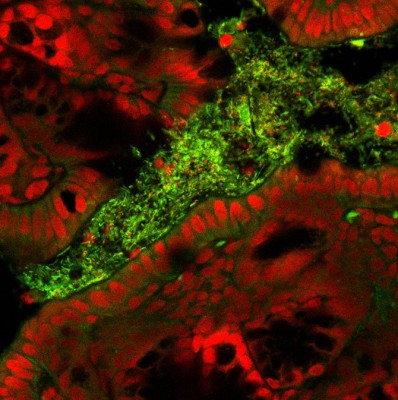 Caption: The nuclei of mouse epithelial cells (red) and the microbes (green) in the mouse intestine are visible.

Caption: Mice raised in built environments with different relative abundances of diverse microbes (left and right) have a correspondingly diverse gut microbiome. These signature characteristics remained even when the mice were moved to a new facility, and they persisted into the next generation.