Cilia on nasal cells beat to move mucus along the airway in this video. People whose cilia don’t beat suffer repeated lung, ear and sinus infections. 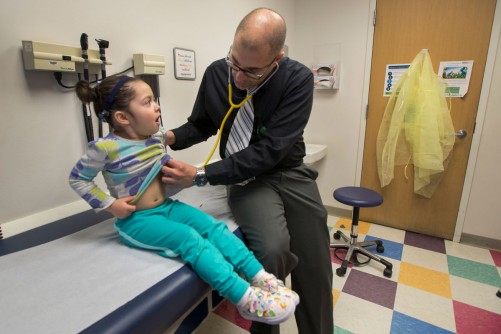 Amjad Horani, MD, listens to the breathing of Azaylea Ramirez, 3, of Keota, Okla. Using cells from children diagnosed with primary ciliary dyskinesia, a genetic lung disease Azaylea has, Horani and colleague Steven Brody, MD, have figured out how mutations disrupt the clearing of the airways. 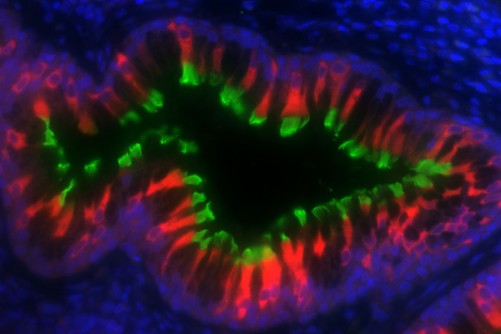 The HEATR2 protein (red) is located in the body of airway cells lining the trachea, not in the cilia (green) or the nuclei (blue). Finding HEATR2 outside of the cilia was the first clue for Amjad Horani, MD, and Steven Brody, MD, that the protein did not form part of the cilia’s motor. Later, they discovered that HEATR2 formed the scaffold on which the motor was built.

Newswise — Respiratory infections peak during the winter months, and most people recover within a few weeks. But for those with a rare genetic lung disease, the sniffling, coughing and congestion never end. The tiny hairlike structures called cilia that normally sweep mucus through the airways don’t work properly in people with what’s known as primary ciliary dyskinesia. When the cilia don’t brush microbes away, it is hard to clear an infection and easy to get another one.

Most people with this disease carry mutations in one of the genes that build the proteins that form molecular motors inside cilia. A single misshapen piece of protein can make the whole machine grind to a halt. But a few people have errors in proteins that are not part of the motor. Until now, no one understood why their cilia don’t beat.

Researchers at Washington University School of Medicine in St. Louis report they have solved that puzzle: The nonmotor proteins are like factory workers who put the motor together. Mutations cause these proteins to assemble the motor incorrectly.

The findings are available in Proceedings of the National Academy of Sciences.

“What’s unique is that these failed motors actually have all their parts, and they are fully formed and normal,” said senior author Steven Brody, MD, the Dorothy R. and Hubert C. Moog Professor of Pulmonary Medicine and a professor of radiology. “It’s like a machine that’s missing just one screw: Everything just falls apart. If we can find a way to hold the motor together, we may be able to treat the disease. This opens a whole new opportunity to screen for medications.”

Primary ciliary dyskinesia affects about one in 15,000 people. Mutations in more than 40 genes have been linked to the disease. Along with recurring respiratory infections, the disease also can cause infertility, as the same molecular motor that drives the cilia also powers the sperm and moves eggs along the female reproductive tract. There is no curative treatment for the disease; rather, doctors treat the patients’ recurrent sinus, ear and lung infections with antibiotics and therapies to relieve symptoms.

Amjad Horani, MD, an assistant professor of pediatrics and the study’s first author, treats about 30 children with primary ciliary dyskinesia at St. Louis Children’s Hospital, where he runs a specialty clinic.

Some of his patients have mutations in a gene called HEATR2. While growing healthy airway cells in the laboratory, Horani and Brody noticed something odd about the HEATR2 protein: It showed up very early, and it was located in the middle of the cell, not in the cilia. Two other proteins associated with the disease exhibited the same pattern.

With the help of David Piston, PhD, the Edward Mallinckrodt Jr. Professor and head of the Department of Cell Biology and Physiology, and staff scientist Alessandro Ustione, PhD, the researchers showed that the three proteins form a scaffold on which the molecular motor later is to be built.

Horani swabbed the noses of some of his patients and grew ciliated cells from them. He found that the scaffold is constructed incorrectly in cells with mutations in any of the three early genes. The proteins that comprise the motor arrive at the faulty scaffolding, but rather than passing through an efficient assembly line and forming a motor, they collect haphazardly into a heap.

“Piling together misfolded proteins turns out to be the way that the body tries to get rid of abnormal proteins,” Horani said. “Now that we know what is wrong, we want to find out, ‘How can we make this work?’ We’re starting to study whether we can prevent the protein heaps from forming and somehow rescue the parts of the motors. If we can get just a few of these proteins to assemble, we may be able to improve quality of life for people with this disease.”