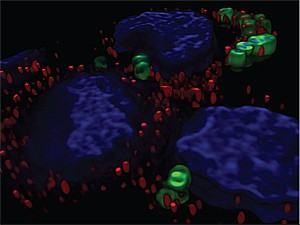 Newswise — Researchers at the University of California, San Diego School of Medicine have discovered a genetic risk factor for premature birth. The risk factor is related to a gene that codes for a protein that the scientists have found helps the body’s immune cells recognize and fight Group B Streptococcus (GBS) bacteria.

These bacteria are found in the vagina or lower gastrointestinal tract of approximately 15 to 20 percent of healthy women, but may cause life-threatening infections, such as sepsis or meningitis in newborns, especially those born prematurely.

The study is published online in the May 5, 2014 issue of the Journal of Experimental Medicine.

“Pregnant women are universally screened for these bacteria during pregnancy and administered antibiotics intravenously during labor if they test positive to protect the infant from infection," said Victor Nizet, MD, professor of pediatrics and pharmacy and co-author. “Our research may explain why some women and their infants are at higher risk of acquiring severe GBS infections than others.”

In the study, scientists identified two proteins on fetal membranes of the placenta that are involved in immune function. One of the proteins (known as Siglec-5) binds to the GBS pathogen and suppresses immune response to the microbe, while the other protein (known as Siglec-14) binds to the pathogen, and activates killing of the bacteria. Siglecs are cell surface receptors found typically on immune cells. They recognize (bind) sialic acids - sugar molecules that densely coat our cells.

Scientists believe that the pair of proteins together helps balance the body’s immune response to pathogens, by directing some antimicrobial response without provoking excessive inflammation.

“Identifying the dual role of these receptors and how they are regulated may provide insight for future treatments against GBS,” Ali said.

Interestingly, the gene for Siglec-14 is missing in some individuals, and the researchers have found that fetuses that lack the Siglec-14 protein are at higher risk of premature birth, likely due to an imbalanced immune response to the bacterial infection.

“We found this association in GBS-positive but not GBS-negative pregnancies, highlighting the importance of GBS-siglec crosstalk on placental membranes,” said Ajit Varki, MD, Distinguished Professor of Medicine and Cellular and Molecular Medicine and study co-author.

For reasons not completely understood, GBS infections are not found in any other animals, including chimpanzees, which share 99 percent of human protein sequences. “The expression of the two siglec proteins on the fetal membranes is also unique to humans,” Varki said. “Our study offers intriguing insights into why certain bacterial pathogens may produce uniquely human diseases.”

The scientists believe that identifying the mechanisms of siglec protein action may help in designing therapeutic targets against bacterial infections that are becoming increasingly resistant to antibiotics and could have important implications for other disorders, such as blood clotting, chronic diseases and HIV infections.

Disclosure: Ajit Varki has an equity interest in Sialix, Inc., which is developing products based on new discoveries of non-human sialic acids and their potential impact on cancer, cardiovascular and other inflammatory-mediated disease. He is also a scientific advisor to the company and a member its board of directors.