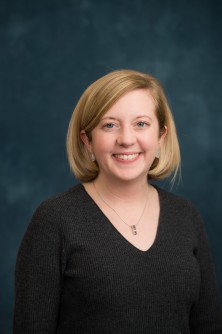 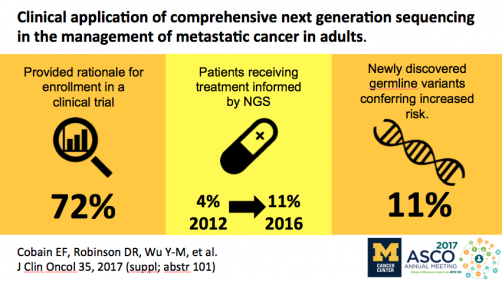 Newswise — ANN ARBOR, Michigan — A new analysis finds that nearly three-quarters of 500 patients with advanced cancer could be referred to a potential targeted treatment based on the results of a comprehensive analysis of their tumor’s genetic landscape.

The study suggests the value of so-called next generation sequencing, a sophisticated method of evaluating the DNA and RNA of a tumor to help direct treatment.

A report on the first 500 patients with advanced solid tumors to go through the University of Michigan Comprehensive Cancer Center’s sequencing program found that 72 percent qualified for a clinical trial based on a genetic marker in their tumor.

While not all of those patients were able to enroll in a trial based on other eligibility factors and trial location, the number who did enroll doubled from approximately 5 percent of patients in 2012 to 11 percent in 2016. Increased trial enrollment occurred as several major national biomarker-based studies opened.

“Availability of biomarker trials is crucial for being able to act on these results. Over time, we became better at matching patients to clinical trials as more of these basket trials opened,” says Erin Cobain, M.D., clinical lecturer of hematology/oncology at the University of Michigan Medical School.

Cobain will present these findings at the American Society of Clinical Oncology annual meeting.

The Michigan Oncology Sequencing Center began in 2011, sequencing the DNA and RNA of metastatic cancers and normal tissue to identify alterations that could help drive treatment. About 900 patients with advanced cancer have enrolled to date. The analysis presented at ASCO focuses on the first 500 patients with solid tumors.

Results of the sequencing are discussed by a team of oncologists, genetics specialists, pathologists, bioinformatics specialists and genetic counselors, among others, at a precision medicine tumor board. This group discusses all results and assesses the feasibility of pursuing treatment options based on the genomic findings.

Genetic sequencing involves looking at all of the DNA and RNA expressed within a tumor. Scientists comb through this enormous amount of data to identify anomalies that may prove to be targets for existing approved or experimental therapies.

In addition, the program sequences patients’ normal genome. This means it’s able to identify hereditary genetic variations – those inherited from a mother or father and potentially passed down to children. Researchers found these hereditary variations in 11 percent of patients, none of which had been previously identified through family history.

“That was a major surprise. That 11 percent of patients had a genetic change that increases cancer risk is much higher than we would expect. This has significant impact not only on the patients, but on their families, who may also carry a genetic susceptibility to cancer,” Cobain says.

Mi-ONCOSEQ, which is run as a research study, requires a fresh biopsy, where many commercial sequencing tools can use frozen tissue samples. However, those tests analyze only a limited panel of genes. The goal with Mi-ONCOSEQ was to obtain a large enough sample so that researchers could perform extensive sequencing of both DNA and RNA.

The more-thorough analysis, which covers at least 1,700 genes, meant that many anomalies were identified that would not have been found on panel-based tests that typically cover about 350 genes. Because Mi-ONCOSEQ is run as a research study, patients did not pay for sequencing.

Cobain cites an example of a patient with cholangiocarcinoma, a cancer of the bile duct. Sequencing revealed a novel gene fusion that would not have been identified through panel-based tests. The patient was able to enroll on a clinical trial targeting the gene fusion and had an excellent response to that therapy.

“This would not have been found by a commercial assay,” Cobain says. “Sequencing is beginning to have a real impact on treatment recommendations. It’s important to consider this testing early in the patient’s clinical course in order to improve our ability to act on the results and impact the patient’s course.”