Genetic Signal Prevents Immune Cells From Turning Against the Body 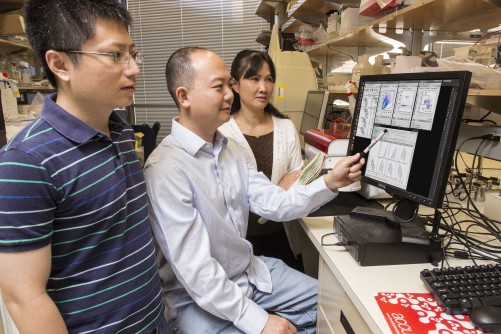 Newswise — LA JOLLA—When faced with pathogens, the immune system summons a swarm of cells made up of soldiers and peacekeepers. The peacekeeping cells tell the soldier cells to halt fighting when invaders are cleared. Without this cease-fire signal, the soldiers, known as killer T cells, continue their frenzied attack and turn on the body, causing inflammation and autoimmune disorders such as allergies, asthma, rheumatoid arthritis, multiple sclerosis and type 1 diabetes. Now, scientists at the Salk Institute have discovered a key control mechanism on the peacekeeping cells that determine if they send a halt signal to the killer T cells. The new research, published today in Cell, could help develop treatments for autoimmune disorders as well as some types of cancer. “We discovered a mechanism responsible for stabilizing the cells that maintain immune system balance,” says senior author Ye Zheng, Salk assistant professor and holder of the Hearst Foundation Developmental Chair. “The immune system plays a huge role in chronic inflammation and if we can better understand the immune system, we can start to understand and treat many diseases.” This balance of signaling for the peacekeeping white blood cells—known as regulatory T cells (“Tregs”)—is crucial to normal immune response. Aside from causing autoimmune disease by not halting the attack, Tregs can conversely send too many cease-fire signals, which causes killer T cells to ignore threatening invasions. For example, some tumors nefariously surround themselves with a high density of Tregs transmitting the cease-fire signal to protect themselves from being attacked. “Tregs are like the surveillance system of the immune response,” says Zheng. “This surveillance system is key to healthy immune reactions, but it can be kicked into overdrive or turned entirely off.” For about a decade, researchers knew that the key to Tregs’ peacekeeping ability is a gene called Foxp3, but they weren’t sure how exactly it worked. Researchers also knew that under certain conditions, Tregs can go rogue: they transform into killer T cells and join in the siege. This change means that they lose the ability to send a ‘halt’ signal and add to inflammation. In the new paper, Zheng’s lab reports that a particular genetic sequence in Foxp3 is solely responsible for the stability of a Treg. If they removed the sequence, dubbed CNS2, Tregs became unstable and often morphed into killer T cells—the type of cell they are supposed to be controlling—resulting in autoimmune disease in animal models. “Foxp3 safeguards Treg to not become anything else,” says Zheng. “Previously, very little was known on how Foxp3 did this. We discovered the area of the Foxp3 gene that determines the stability of Tregs and keeps the immune system balanced.” Without this specific region in Foxp3, Treg cells are much more likely to lose their identity and defect into killer T cells when faced with inflammation and infection, says Zheng. He adds that recent new drugs on the market or in clinical trials are attempting to disable Tregs in tumors to help the body’s own immune system fight cancer. This new work provides a target for future cancer drugs as well as autoimmune treatments. “Now we can try to target this region on Foxp3 to either enhance or reduce the impact of Tregs for treatment of autoimmune disease or cancer, respectively,” Zheng adds. Authors of the work also include Salk researchers Xudong Li, Yuqiong Liang, Mathias LeBlanc and Chris Benner. Funding was provided by the National Institutes of Health, the Nomis Foundation, the National Multiple Sclerosis Society, the Rita Allen Foundation, the Emerald Foundation, the Hearst Foundation, and the James B. Pendleton Charitable Trust. About the Salk Institute for Biological Studies: The Salk Institute for Biological Studies is one of the world's preeminent basic research institutions, where internationally renowned faculty probes fundamental life science questions in a unique, collaborative, and creative environment. Focused both on discovery and on mentoring future generations of researchers, Salk scientists make groundbreaking contributions to our understanding of cancer, aging, Alzheimer's, diabetes and infectious diseases by studying neuroscience, genetics, cell and plant biology, and related disciplines. 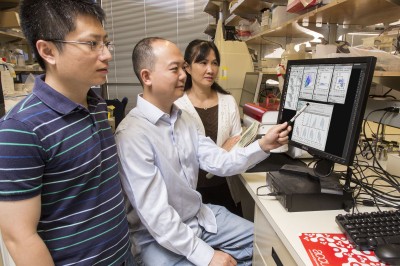