Genetic Switch for Limbs and Digits Found in Ancient Fish 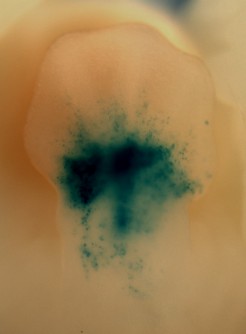 A genetic switch taken from the skate activates a marker gene in the distal limb of the mouse embryo. 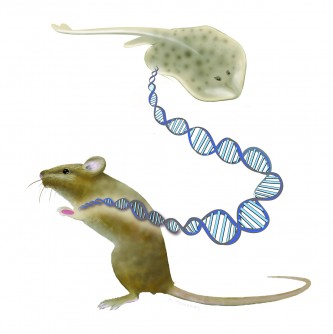 Genetic instructions for developing limbs and digits are shared by species separated by 400 million years of evolution.

Newswise — Genetic instructions for developing limbs and digits were present in primitive fish millions of years before their descendants first crawled on to land, researchers have discovered.

Genetic switches control the timing and location of gene activity. When a particular switch taken from fish DNA is placed into mouse embryos, the segment can activate genes in the developing limb region of embryos, University of Chicago researchers report in Proceedings of the National Academy of Sciences. The successful swap suggests that the recipe for limb development is conserved in species separated by 400 million years of evolution.

"The genetic switches that drive the expression of genes in the digits of mice are not only present in fish, but the fish sequence can actually activate the expression in mice," said Igor Schneider, PhD, postdoctoral researcher in the Department of Organismal Biology and Anatomy at the University of Chicago and lead author on the paper. "This tells us how the antecedents of the limb go back in time at every level, from fossils to genes."

The genetic hunt was inspired by a famous fossil find – the 2004 discovery of the transitional fossil Tiktaalik in the Canadian Arctic by a team led by Neil Shubin of the University of Chicago. A transitional species between fish and the four-legged tetrapods, Tiktaalik possessed fins containing a skeletal structure similar to the limbs of later land-dwelling animals.

Those similarities – particularly the wrist and hand-like compartments present in the fins of Tiktaalik and its peers – inspired a laboratory experiment to look at the homology, or shared physical and genetic traits, of fish and limbed animals.

"This is really a case where knowing something about the fossils and the morphology led us to think about genetic experiments," said Shubin, PhD, the Robert R. Bensley Professor of Organismal Biology and Anatomy and senior author of the study. "Tiktaalik and its cousins showed us that this limb compartment is not an utter novelty in tetrapods, as was thought for a long time. So an antecedent of that program must exist."

The research team compared a genetic switch region called CsB, known to regulate limb development in humans, with similar regions in mice, chickens, frogs, and two fish species: the zebrafish and the skate. Because the last common ancestor of all these species pre-dates Tiktaalik-like "fishapods," the comparison offered a glimpse at biology before animals made their first steps on land.

Schneider and colleagues compared the CsB regions from all five species and found that certain sequences were shared between the fish species and the tetrapods. The conservation allowed the researchers to try swapping switch sequences between species to see if they could still drive gene expression in the fin or limb. Remarkably, mouse CsB could turn on gene expression at the outer edge of the developing fin region of zebrafish, and both skate and zebrafish CsB were capable of activating gene expression in the wrist and proximal digits of the mouse limb.

"These sequences function in these organisms despite 400 million years of separation," Schneider said. "The homologies that are perhaps not evident by morphology – just comparing a hand and a fin – can be traced back to the genome, where you find that the regulatory regions that control the making of those structures are actually present and shared between these organisms."

The results contradict a previous finding that a developmental switch from pufferfish DNA was not capable of gene expression in the limbs of mice, suggesting that tetrapods evolved a novel developmental system. But the new experiments suggest that the genetic switch controlling limb development was in fact present deep in Earth's evolutionary tree.

"There previously was the idea that these switches had to be generated from scratch de novo, but no, they already existed, they were already there," said Marcelo Nobrega, MD, PhD, assistant professor of human genetics at the University of Chicago Medical Center and another author of the study. "Maybe the key was expressing a gene earlier or later or in a specific territory, but it was just a modification of a program that was already encoded in the genomes of fish almost half a billion years ago and remains there to this day."

"These new results are actually in line with both the fossil data and the expression data," Schneider said. "So now we can tell a story where the fossils and gene expression make sense in light of the genetic regulation."

Future experiments will focus more closely on how the gene regulation system functions, examining the differences between the segments in fish and tetrapods that control development of either a fin or a limb. Subtle changes in the timing or location of gene expression may produce the dramatic differences in anatomy that first allowed animal life on Earth to explore land.

"There is a whole universe of questions that are opened up by this discovery," Shubin said.

The paper, "Appendage expression driven by the Hoxd global control region is an ancient gnathostome feature," will be published online the week of July 11 by the Proceedings of the National Academy of Sciences. In addition to Shubin, Schneider, and Nobrega, authors include Ivy Aneas and Andrew R. Gehrke of the University of Chicago, and Randall D. Dahn of Mount Desert Island Biological Lab.

Funding for the research was provided by the American Heart Association and the University of Chicago Biological Sciences Division. 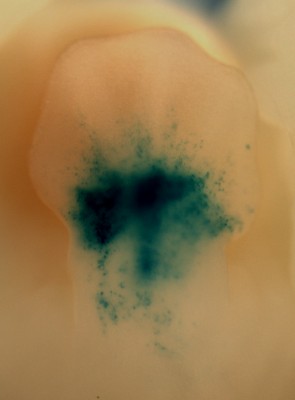 Caption: A genetic switch taken from the skate activates a marker gene in the distal limb of the mouse embryo. 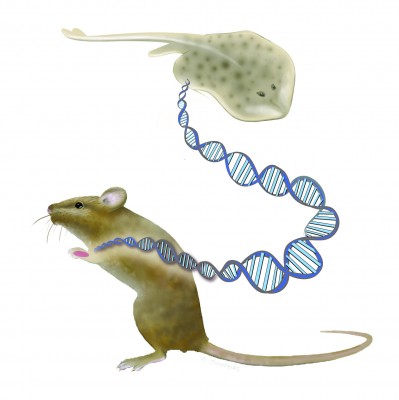 Caption: Genetic instructions for developing limbs and digits are shared by species separated by 400 million years of evolution.

Proceedings of the National Academy of Sciences (July 11, 2011)