Award recognizes outstanding contributions to the community of genetics researchers 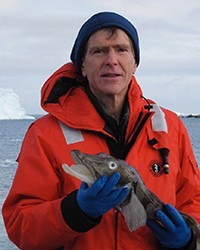 Dr. Postlethwait with icefish in Antarctica

Newswise — BETHESDA, MD – The Genetics Society of America (GSA) is pleased to announce that John H. Postlethwait, PhD (University of Oregon) has been selected to receive the Society's George W. Beadle Award for outstanding contributions to the community of genetics researchers. The award, whose namesake was a Nobel laureate and geneticist, recognizes Dr. Postlethwait's seminal contributions to the zebrafish community. Dr. Postlethwait will receive the honor next week at GSA's 6th Strategic Conference of Zebrafish Investigators, January 17–21, in Pacific Grove, CA.

"Dr. Postlethwait's work began the molecular genetic era of zebrafish research and has helped to demystify the evolution of genes and genomes," said Alex Schier, PhD, Leo Erikson Life Sciences Professor and Chair of Molecular and Cellular Biology at Harvard University, and an organizer of next week's conference. "He has also strengthened the zebrafish community through his generous data sharing, collaborative spirit, and help for dozens of labs in mutation and gene mapping."

One of Dr. Postlethwait's most valuable contributions to the zebrafish community was his groundbreaking research that established this organism as a model system for vertebrate genetics. He built the first genetic map for zebrafish, which spurred the discovery and functional characterization of numerous genes involved in development, and showed that the zebrafish genome, along with that of distantly related teleost fish, had been duplicated. The Duplication-Degeneration-Complementation (DDC) model he proposed was a major conceptual advance that yielded insight into the mechanisms governing the evolutionary fate of duplicated genes. Dr. Postlethwait played an integral role in the zebrafish genome sequencing project, and his additional work has elucidated the genomic organization of several fish species. Recently, his research revealed that the zebrafish strains used in laboratories lack the natural sex determination system of their wild counterparts. His current research also focuses on the evolution of vertebrate genomes and the search for therapies in zebrafish models of disease. In addition to his technological, conceptual, and research contributions to the community, Dr. Postlethwait is especially honored for his active involvement with the zebrafish community, advocacy for zebrafish as a model system, and commitment to driving the field of zebrafish genetics forward.

Dr. Postlethwait has authored nearly 250 scientific publications as well as several biology textbooks. Early in his career, he received a Research Career Development Award from the National Institutes of Health as well as the Ersted Award for Distinguished Teaching from the University of Oregon. In 2007, he received the Medical Research Foundation Discovery Award for significant, original contributions to health-related research and the Oregon Discovers Achievement Award. In 2009, Dr. Postlethwait received the Humboldt Research Award to study mechanisms involved in Fanconi anemia.

The George W. Beadle Award, established by GSA in 1999, honors individuals who have made outstanding contributions to the community of genetics researchers and who exemplify the qualities of its namesake as a respected academic, administrator, and public servant. Beadle (1903–1989) served as the President of GSA in 1946; he was awarded the 1958 Nobel Prize in Physiology or Medicine for his work with Edward L. Tatum in discovering that genes act by regulating definite chemical events.