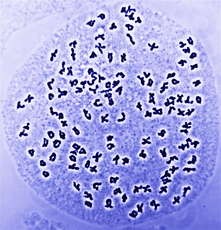 Polyploidy is important in the origin of new plant species and has caused some species to have an astoundingly large number of chromosomes. This photograph is a "chromosome squash" of a hexaploid (six genome copies) fern species of the genus Cystopteris. This species has 126 pairs of chromosomes.

Newswise — Extra genomes appear, on average, to offer no benefit or disadvantage to plants, but still play a key role in the origin of new species, say scientists from Indiana University Bloomington and three other institutions in this week's Proceedings of the National Academy of Sciences.

Plant biologists have long suspected polyploidy -- the heritable acquisition of extra chromosome sets -- was a gateway to speciation. But the consensus was that polyploidy is a minor force, a mere anomaly that accounts for 3 or 4 percent of the world's flowers and ferns.

"In the present paper, we make it clear that it is a common process," said evolutionary biologist and lead author Troy Wood, who began the research during graduate training at IU Bloomington. "Fifteen percent of flowering plant species and almost a third of fern species are directly derived from polyploidy."

Wood is now a research scientist at University of Muenster in Germany.

Could polyploidy provide plants with a powerful advantage over their chromosome-challenged peers? Not necessarily. The scientists' exhaustive survey of published phylogenetic and genomic data also shows that plant lineages starting with a polyploid ancestor appear to be no more successful at spawning species than diploid plants, which have two sets of chromosomes.

Rieseberg holds joint appointments at the University of British Columbia and IU Bloomington.

"The present study developed out of an ongoing project to write a book about plant speciation," Rieseberg said. "I felt that recent estimates of the polyploid speciation rate were too conservative because they did not take genealogical history into account. Troy began compiling chromosome number data and phylogenetic trees so that we could generate a more accurate estimate of the frequency of polyploid speciation."

While the variation that leads to new species is usually a glorious accident, evolutionary biologists are beginning to identify the biological properties of organisms that make those accidents stick around long enough for new species to become established. If whatever separates the new breed from its original population is tenuous, it's possible the new and old populations will comingle, negating the possibility of a new species. Geographic separation or "reproductive isolation" is crucial.

Mechanisms of reproductive isolation are almost as vast and varied as the species they make possible.

In some animals, sudden, heritable changes in the size and shape of genitalia have the potential to prevent some individuals of a population from mating with most of the others. Even though sexually reproducing plants do not rely on this sort of "lock and key"-type of sex matching, they have equivalent, more subtle systems for preventing the wrong pollen from fertilizing their eggs.

Polyploidy can also result in speciation, as polyploid individuals often cannot produce viable offspring with their diploid (two sets of chromosomes) relatives. While the polyploid and diploid individuals may appear more-or-less identical to one another, their genetics make sexual reproduction unlikely or impossible.

Some animals can handle polyploidy, but for most vertebrate species, an extra chromosome set is a death sentence. Humans, for example, can barely tolerate the presence of even one extra chromosome out of the total set of 23. Most human "trisomies," as these are called, result in natural abortion, or miscarriage. Non-lethal human trisomies result in developmental disorders, such as Down Syndrome. Human zygotes with three full sets of chromosomes do not develop.

Plants are pretty special. Not only can many species tolerate extra chromosome sets, but polyploidy appears to be a recurring theme throughout plant evolution. The question is why.

"Recent data reveal evidence of polyploidy in an array of plants, like grapes, poplar trees, corn, and many others," Wood said. "In most of these cases the evidence points to ancient polyploid events. Some species of flowering plants have more than 400 chromosomes and some fern species more than 1,000 due to repeated instances of polyploidy during their evolution. While these examples might seem remarkable, given the high frequency of polyploidy speciation documented here, the bigger surprise would be if plant lineages were found in which polyploidy was absent."

One implication of the PNAS paper is that Wood, Rieseberg, and their coauthors may be getting close to solving the mystery. If extra genomes provide no special advantage over relatives, the ubiquity of polyploidy in plants could simply be because polyploid mutants are commonly produced. Evolutionary change that doesn't involve the plus-or-minus forces of natural selection is called "neutral" in evolutionary biology parlance.

"I really thought we would find evidence that polyploids have an advantage," Wood said. "The idea that the large number of polyploid species and the attending high chromosome numbers might be simply due to a neutral process is intriguing."