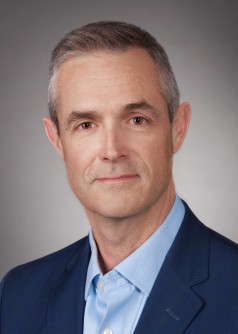 Newswise — As a young scientist, David Peters was focused on the brain – more specifically, brain aneurysms as researched through the lens of high-throughput genomics.

But when his wife became pregnant with the first of their two children, his world – both as a husband and a scientist – dramatically changed course.

A native of England, Peters came to the University of Pittsburgh in the mid-1990s for post-doctoral research in human genetics. For about six years, he ran a lab that took a global view of biological systems – largely aneurysms, but with some study of oncology – through a genomic perspective: How do cells regulate themselves? How does DNA sequence variation impact that regulation? How do these relate to disease and disease risk?

Genomics was a relatively new science, so “it was a bit off the wall,” he admits.

He repatriated to the United Kingdom in 2004 shortly after his wife underwent an amniocentesis test during her first pregnancy. It was a risky procedure using a needle to draw out amniotic fluid, causing 1 in 150 women to miscarry their otherwise healthy babies.

“I was surprised and pretty horrified at the rate of fetal loss from invasive prenatal testing,” he recalls.

Despite a second amniocentesis procedure with her second pregnancy, his wife and their two children emerged unscathed. But Peters’ scientific curiosity was piqued – so much so that he switched from studying aneurysms and cancer to developing prenatal tests that did not use a needle as part of the diagnostic procedure.

As he mulled over the possibility of creating a safer procedure, he contacted the then-chairman of obstetrics and gynecology at Pitt, who invited him to return to the U.S. and pursue that line of research. Peters accepted, and in April 2007 – now with two children in tow – he and his wife moved back for their next adventure, this time as part of the team at Magee-Womens Research Institute.

For Peters, the idea of doing work that could have a real impact on patients’ lives was intriguing. During the first decade of his career, although he was a translational researcher, in reality, “we’re just sort of scratching the surface of a distant planet; we’re nowhere near the patient,” he says.

Returning to Pittsburgh also represented an interesting scientific problem. At the time, the field had determined that placental DNA from the unborn baby’s genome floats around and is detectable, and recoverable, from maternal plasma. What that means is if a lab draws the mother’s blood and spins the cells out, the remaining plasma contains what Peters refers to as “a whiff of fetal DNA.”

At the time, it was not enough to test for genetic disorders such as Down syndrome, which was the purpose for the more invasive amniocentesis. But Peters decided to apply a more global view to the problem, using computational methods to try and analyze the sample.

He brought in statistician Tianjiao Chu, with whom he had worked when Chu was a graduate student in philosophy from nearby Carnegie Mellon University, to create a statistical model that painstakingly searched for the baby’s DNA, a proverbial needle, in the haystack of the mother’s plasma – although the DNA is so similar that Peters says a more accurate comparison would be like looking for “a needle in a stack of needles.”

They successfully managed to identify Down syndrome, and they proved that their test would work in any disorder involving a whole chromosome change, including Edwards and Patau syndromes In 2011, Peters’ lab became the first to use the technology to identify an entire class of smaller anomalies. And they found that it could also apply across a wide range of diseases.

“When you have a way of thinking about disease, or detection of disease, you have a toolkit of things that are quite useful. It would be a shame not to use them” in as many diseases as possible, Peters says.

A current collaboration with Lisa Pan, a professor of psychiatry at Pitt’s School of Medicine, sequences the genome of patients with major depressive disorders who do not respond to any form of therapy. Pan found metabolic anomalies in their spinal fluid, and in many cases, she was able to apply corrective drug therapy that allowed the patients to recover.

The two are working to determine whether there is a genetic root cause to the metabolic anomalies identified in Pan’s research, one that might show up in biomarkers that predict or allow for diagnosis of psychiatric disease, or predict how a patient might respond to therapy.

During a meeting that was part of that collaboration, Peters was also drawn into a project related to necrotizing enterocolitis (NEC), a catastrophic autoimmune reaction some premature infants have to their own intestines, causing them to shed the lining of their own tiny guts. Diagnosis often doesn’t happen until after the babies are already in significant danger.

Peters had never heard of the disease, but he theorized that biomarkers could be developed that could improve clinical outcomes. So now he is working toward developing a diagnostic tool for NEC. His work targeting genomic analysis of neonatal necrotizing enterocolitis won a $1.5 million grant from UPMC’s Center for Commercial Applications of Healthcare Data.

“This is how beautifully convoluted academia can be,” he says. “I think that’s why I like it.”

He remembers when he was back in England, in a gray office, looking out the window at a brick wall through pouring-down rain. As he mulled whether he should change the course of his career, he told himself: “If we’re going to do this, it’s going to be a different track: it will be high-risk, high-yield.”

That’s how it still feels, even 10 years and several success stories later.

“You’re always challenged. You spend a lot of time with less than perfect results. And then you get these little blips of: ‘OK, that’s a win.’ And you’re hoping that the little wins get bigger,” he says. And when the solution comes, he says, “it’s just bloody obvious … it’s always easy in hindsight.”