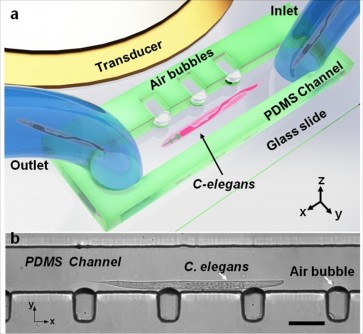 Design and operation of the acoustofluidic rotational manipulation (ARM) device. (a) A schematic of the experimental setup. The piezoelectric transducer that generates acoustic waves is placed adjacent to the microfluidic channel. The acoustic waves actuate air microbubbles trapped within sidewall microcavities. (b) An optical image showing a mid-L4 stage C. elegans trapped by multiple oscillating microbubbles. Scale bar = 100 μm. 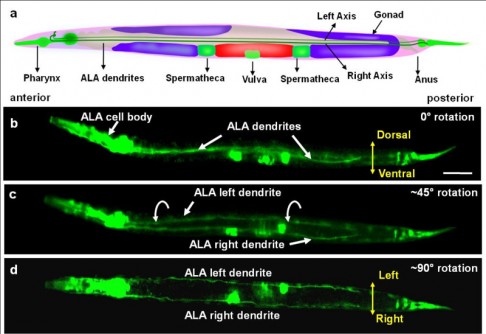 Newswise — UNIVERSITY PARK, Pa --A method using acoustic waves in a microfluidic device to rotate single particles, cells or organisms will allow researchers to take three dimensional images with only a cell phone. Acoustic waves have been used to move and position biological specimens along the x, y and z axes, but for the first time researchers at Penn State have used them to gently and safely rotate samples, a crucial capability in single-cell analysis, drug discovery and organism studies.

The research, published today in Nature Communications, was led by Tony Jun Huang, professor of engineering science and mechanics and Huck Distinguished Chair in Bioengineering Science. In this article, his group describes an acoustofluidic rotational manipulation (ARM) method that traps bubbles in a series of small cavities inside a microfluidic device. Acoustic transducers similar to ultrasound imaging transducers create an acoustic wave in the fluid, causing the bubbles to vibrate. The vibrating bubbles create microvortexes in the flowing liquid that can be tuned to cause the sample to rotate in any direction and at any desired speed. “Currently, confocal microscopes are required in many biological, biochemical and biomedical studies, but many labs do not have access to a confocal microscope, which costs more than $200,000. Our ARM method is a very inexpensive platform,” said Huang. “And it is compatible with all the optical characterization tools. You can literally use a cell phone to do three-dimensional imaging.”

To demonstrate the device’s capabilities, the researchers for the first time rotated C. elegans, a model organism about a millimeter in length that is frequently used in biological studies. They also acoustically rotated and imaged a HeLa cancer cell, also for the first time. Existing methods of manipulating small objects either depend on the optical, magnetic or electrical properties of the specimen, and/or damage the specimen due to laser heating. The ARM method, on the other hand, uses a gentle acoustic wave generated by a similar power as ultrasound imaging and at a lower frequency. The device is also compact and simple to use.

Concerning the ability to manipulate multiple cells at once, co-lead author Adem Ozceki, graduate student in engineering science and mechanics, said, "Our method is a valuable platform for imaging and studying the effect of rotation at the single cell level. More important, with the capacity to rotate large numbers of cells in parallel, researchers will be able to perform high-throughput single-cell studies."

In addition to its applicability to a large range of biological and physical science investigations, ARM technology has demonstrated excellent biocompatibility by conducting a HeLa cell viability test in which 99.2 percent of cells survived manipulation.

The work was supported by grants from the National Institutes of Health, National Science Foundation, and the Center for Nanoscale Science, an NSF Materials Research Science and Engineering Center at Penn State. Components of the work were conducted at the Penn State Materials Research Institute’s Nanofabrication Laboratory. 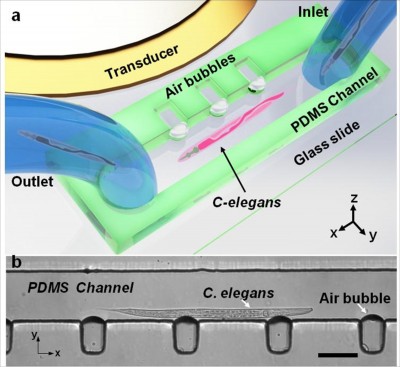 Caption: Design and operation of the acoustofluidic rotational manipulation (ARM) device. (a) A schematic of the experimental setup. The piezoelectric transducer that generates acoustic waves is placed adjacent to the microfluidic channel. The acoustic waves actuate air microbubbles trapped within sidewall microcavities. (b) An optical image showing a mid-L4 stage C. elegans trapped by multiple oscillating microbubbles. Scale bar = 100 μm. 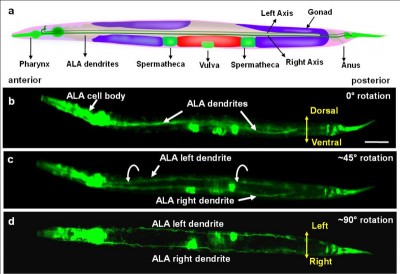