Geometric Study of Brain Cells Could Change Strategies on Alzheimer's 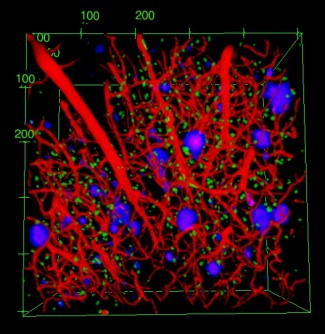 3-dimensional representation of the astrocytes, plaques and blood vessels. UAB

Newswise — UAB researchers have found that, contrary to current thinking, astrocytes are repelled by the amyloid plaques that are linked to the disease.

Applying mathematical models used for studying the galaxies or interactions between elementary particles, researchers at the Institute of Neuroscience of the Universitat Autònoma de Barcelona, in collaboration with Massachusetts General Hospital, Boston, have analysed the spatial distribution of astrocytes: brain cells that are essential for the correct functioning of neurons. This research is published today in Proceedings of the National Academy of Sciences.

The scientists observed that these cells seem to be repelled by the amyloid plaques. These plaques are associated with development of Alzheimer's disease and several therapeutic strategies are aimed at reducing their formation and eliminating them. Up to now researchers thought that the astrocytes migrated towards the amyloid plaques and devoured them, so that reinforcing their activity could be a good remedy against development of the disease. However, this analysis of astrocyte distribution shows the opposite: the astrocytes seem to be repelled by the plaques.

"This discovery is very important, as the elimination of amyloid plaques by the brain cells themselves is one of the key strategies under development as a cure for Alzheimer's disease. Therefore, clarifying which cells can and cannot eliminate the plaques is essential for obtaining effective therapies", explains Elena Galea, a researcher at the UAB's Institute of Neuroscience and ICREA lecturer.

The research sought to identify the forces that shape the interaction between the astrocytes and the amyloid plaques in order to obtain a representation of the relative positions they adopt. To this end it borrowed techniques from statistical physics used to determine, for example, the evolution of the galaxies based on the forces of interaction between the stars that compose them. Instead of galaxies and stars, the scientists analysed 3-dimensional images of the astrocytes inside the brains of mouse models of Alzheimer's disease.

Statistical analysis of these 3-dimensional images shows that the astrocytes repel each other, and that they are also repelled by the amyloid plaques. Thus, the balance between these forces of repulsion maintains the "territorial organisation" of the astrocytes, and when there are many plaques this induces a spatial tension in the astrocytes. In the words of Elena Galea, perhaps the most important information this study provides is that "contrary to what Alzheimer's researchers assume, the astrocytes do not break up this organisation to move towards the plaques and phagocytose them. Rather, they move slightly away from them".

Nevertheless, the astrocytes must "feel" something when plaques are formed, as when this happens they produce more of their characteristic protein, GFAP. "This implies that the astrocytes could be reacting against the formation of amyloid plaques by modifying their function rather than changing position, concludes Galea.

Proceedings of the National Academy of Sciences DOI: 10.1073