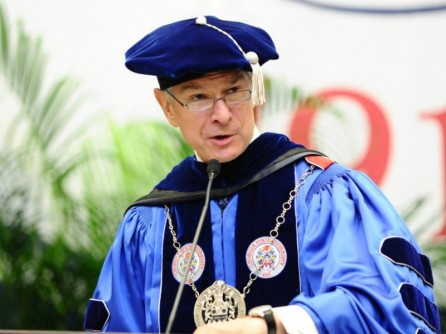 Newswise — Georgia State University President Mark P. Becker is among seven university presidents named by the Carnegie Corporation of New York as recipients of its Academic Leadership Award, which provides $500,000 in support for each winner’s academic initiatives.

The award recognizes “educators who, in addition to fulfilling their administrative and managerial roles with dedication and creativity, demonstrate vision and an outstanding commitment to excellence in undergraduate education, the liberal arts, equal opportunity, the development of major interdisciplinary programs, international engagement and the promotion of strong ties between their institutions and their local communities.”

In its announcement, the Carnegie Corporation cited Becker for “leading Georgia State through a 10-year strategic plan that has resulted in the institution’s emergence as a leader in student equity, especially for African-American students. Through targeted, data-driven support systems, Georgia State has eliminated disparities in graduation rates based on race, ethnicity, income level and first-generation status. In addition, the percentage of minority students graduating in (science, technology, engineering and mathematics) fields over the past five years has increased 69 percent for black students and 226 percent for Hispanic students.”

“There are more than 4,000 colleges and universities in the United States, which play a fundamental role in educating the next generation of our workforce, leaders, and citizens. Our higher education institutions are central to the future of our nation,” said Vartan Gregorian, president of Carnegie Corporation. “Andrew Carnegie believed in the importance of strong, dedicated and effective higher education leaders. As custodians of Mr. Carnegie’s legacy, it is our honor to salute a new class of exemplary leaders who join with another 20 past award recipients in representing some of the best of the American academy.”

Established in 2005, the award reflects the conviction of Andrew Carnegie, the corporation’s philanthropic founder, that education and knowledge are fundamental tools for strengthening democracy and creating a more vibrant civil society.