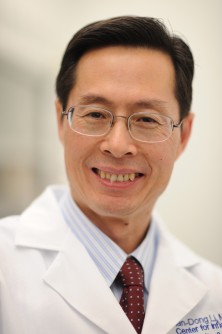 Newswise — ATLANTA—Dr. Jian-Dong Li, director of the Institute for Biomedical Sciences (IBMS) at Georgia State University and a Georgia Research Alliance Eminent Scholar, has been appointed to serve on the National Institutes of Health (NIH) Council of Councils (CoC).

The national appointment by the director of NIH lasts six years, from 2016 to 2022. The Council will meet three times a year in Bethesda, Md.

The Council is made up of about 30 members selected from NIH institutes and centers (IC) Advisory Councils, representatives nominated by the Office of the Director program offices and broad representation, including a member of the NIH Council of Public Representatives. Learn more about the council members.

The Council advises the director of NIH on interdisciplinary research efforts to address major, trans-NIH priorities and strategic initiatives and on matters related to the policies and activities of the Division of Program Coordination, Planning, and Strategic Initiatives (DPCPSI). The Council also acts as an external advisory panel to the IC directors during the “concept approval” stage of the NIH Roadmap initiative review process. The concept approval stage involves the consideration of a list of potential trans-NIH initiatives developed by the DPCPSI staff after receiving input from multiple sources.

Li is the founding director of the Institute for Biomedical Sciences and is responsible for leading the effort to establish a premier, multidisciplinary research and degree-granting institute at Georgia State. The Institute advances fundamental, innovative biomedical research that improves human health, as well as training future generations of biomedical scientists and health professionals.

Li’s research focuses on how inflammation is regulated in a number of diseases, including infectious diseases. He is also developing new anti-inflammatory therapeutic agents for treating inflammatory diseases. His research has been funded by the NIH.