Newswise — When given a choice this summer between helping out with designs for environmentally friendly luxury condos less than a mile away from campus and designing and building solar latrines to improve sanitation in Bolivia, Georgia Tech All-American wide receiver Calvin Johnson chose the latrine project without hesitation.

"Are you sure?" said Kevin Caravati, a student project advisor and senior research scientist at the Georgia Tech Research Institute (GTRI). "The other project is right down the street."

Johnson's response was brief and to the point. "I want to help the less fortunate," he answered.

"You realize how fortunate you are when you see that people around the world don't have clean water and sanitation," Johnson said.

"We wanted help with the project, but it was tough to find students enthusiastic about latrines," Caravati said. "Calvin was our first volunteer. He wanted to have a hands-on experience to build a prototype that had the potential to have a huge global impact on people."

He was then joined by his project partner Brad Davis, a building construction student at Georgia Tech, and the two hammered out a final design with Caravati. The goal was to create an improved solar latrine out of the most affordable and available materials. The interior needed to be heated at a minimum of 120 degrees Fahrenheit to kill pathogens, and the design and materials had to be as simple and cost effective as possible.

"We focused on designing the most inexpensive and durable model, taking into account what materials would be readily available in those nations. This gave Calvin and me the ability to think outside of the box and use everyday materials in our design," Davis said.

The team made two prototypes from a hodgepodge of household items, including a bicycle tube to insulate the waste and retain heat, a bleach bottle, plexi-glass, scrap wood and tin foil. The central idea was to "bake" the waste with an oven-like design that could reach temperatures of more than 150 degrees Fahrenheit while still keeping the inhabited area cool enough for users.

Johnson, Davis and Caravati were able to build two very effective prototypes that would cost only $78 per unit, compared to $120 for existing models used. They were also able to reach sustained temperatures of over 150 degrees while still keeping the inhabited area cool enough for users.

With the initial prototypes completed, Johnson and the rest of the Georgia Tech project team plan to travel in January to a remote area of Bolivia's Andes Mountains to build several of the new latrines and instruct locals on how to build their own.

"I'm looking forward to making the trip to Bolivia after the season," Johnson said. 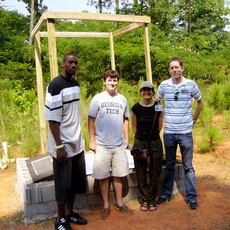 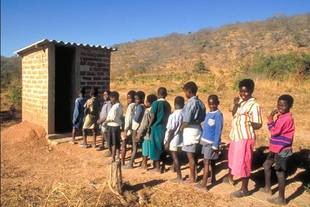 Caption: Children in Africa wait to use a typical sanitation facility. The lack of water and infrastructure contribute to millions of deaths annually from inadequate water supplies and poor sanitation practices.