Get Ready for Shark Week 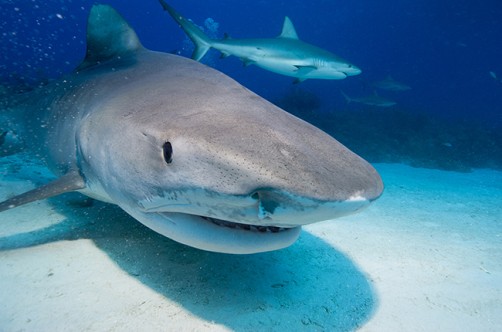 Wells, an assistant professor and head of the Shark Biology and Fisheries Science Lab at Texas A&M University at Galveston, studies the biology and ecology of bony fishes, sharks and rays. We asked him what he’s learned about sharks and about his lab’s conservation efforts.

Dr. Wells:  I’ve always been interested in the ocean.  When I was a kid growing up in Nevada, I watched a series called “The Voyage of the Mimi.”  It was about a little boy traveling around on a sailboat with his grandfather for the summer.  They were doing all this cool stuff and learning about ocean and marine life.   I was in third or fourth grade when it aired, but that show really sparked my interest and made me say, “That sounds awesome.  That’s what I want to do.”

As I got older, I didn’t know specifically what I wanted to do in marine biology.  I chose fish because I knew it was a resource we need to conserve and protect, and I knew there would be a job managing those kind of resources.  Studying fish, I’m able to research a large array of species.  When someone says they work with fish, it could mean they work with sharks or fish.  The difference between sharks and fish is fish have true bones, while sharks have cartilage.

In regard to sharks, can you share one of the most interesting things you’ve learned through your research?

Dr. Wells:  Sharks have vertebrae.  One can count the rings on the vertebrae to age a shark, just like a tree ring.  We always thought that one band is formed on vertebrae each year, but we recently found out that shortfin mako sharks in the Pacific Ocean lay down two bands each year when they are juveniles.  Once they reach sexual maturity, it changes to one band per year.  These findings have large management implications because the whole age structure of the population now needs to be reassessed.

Dr. Wells:  I hope so because they are my favorite shark.  They are capable of moving great distances across ocean basins and have the ability to thermoregulate, meaning they have the ability to increase their body temperatures internally, up to 10°C relative to the water around them, in order to forage in deeper water.  Most fish and sharks cannot regulate their body temperature and simply have to move to preferred water temperatures.

Are there other gaps that need to be filled in regards to shark research?

Dr. Wells:  The big three are probably movement, life history and feeding.  You think we know a lot about movement because of the satellite tracking studies that receive much of the publicity.  But if you think about it, you’re working on a species and you’re tagging maybe ten to thirty individuals, but that’s really not enough to characterize the movement of an entire population across an ocean basin.

We are also learning what specific oceanographic features and habitats sharks utilize.  For example, frontal features, where a warm and cooler current come together, is often where a lot of prey and large predators are found.  The tagging and movement studies help us find these areas.

Referring back to the mako, basic life history studies are important, as well as feeding studies and food web work.  We look at the stomachs of dead sharks and can pump the stomachs of live sharks to see what they are eating.  We can also look for chemical tracers in tissue samples to see feeding patterns like what they’re eating and where they’re obtaining their prey

People tend to sensationalize anything concerning sharks.  What would you like people to keep in mind regarding sharks?

Dr. Wells:  Very, very few shark species actually attack or bite people.  You have a very small group of species that are capable of biting or attacking a person.  And of that group, you have even fewer who eat mammals.  Large white sharks eat seals, so yes, most attacks will be from a great white-that is why they get such a bad reputation.  But most sharks eat small fish, squid and crabs.  People are not prey items.

And most attacks are just a bite.  On the Texas coast, the bull shark is going to be the most likely species.  And typically you hear about a bite, because they’re aggressive by nature, but they are in search of fish.  They take a bite, then they’ll leave you alone for the most part, because you are not on the menu.

A great source of information where people can educate themselves about shark attacks is the Florida Museum of Natural History’s International Shark Attack File.  They also have a page regarding deaths caused by everyday risks versus sharks.  Look at the numbers and look at the other things that are far more dangerous like riding a bicycle or being struck by lightning.

What is the biggest danger to sharks as a species?

Dr. Wells:  People, and more specifically overfishing.  Historically a lot of the larger, more charismatic species have been overfished and their populations have decreased.  Most of the overfishing has occurred through bycatch, or incidental catches, with commercial fishing operations that target swordfish or tuna.  If sharks get caught and stay on the line for hours, by the time you pull them up they’re either dead or so fatigued that by the time they go back in the water they don’t make it.

Many species don’t produce many offspring and they are slow to grow to an age of sexual maturity.  Some of them don’t become mature until they’re over twenty years old, so they can’t rebound as quickly.

Why is it important for us to care for and protect these creatures?

Dr. Wells:  They are the large predators of the ocean and they control everything below them in the food web.  If you pull out these large predators, the entire community that lives in the same habitat changes for the worse.  It’s really important to have them there to regulate and balance the ecosystem.  That’s why we need to do everything we can to not only learn everything we can, but educate the public about them.  Their conservation is not only beneficial for the species, but for ocean habitats and ecosystems as a whole.

Support Wells and his conservation efforts by donating to the Texas A&M University at Galveston Shark Biology and Fisheries Science Lab at www.wellsfisherieslab.com.  All donations go towards purchasing lab equipment and tracking and tagging devices.