Getting to the root of plant survival 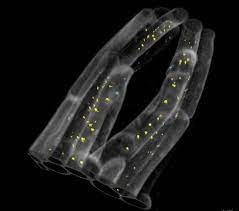 University of Delaware researchers have identified hormones and proteins that interact to regulate the root emergence process, which could lead to advances in helping plants grow in dry weather caused by climate change. Above is a microscopic cross-section of primary root cells illustrates cellular separation during lateral root emergence. 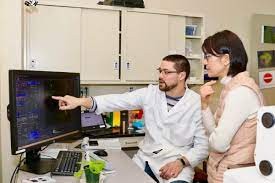 Newswise — When facing a volatile climate, nature searches for a way to survive. For plants, that often means spreading new roots deeper and wider in search of water, particularly in times of drought. While scientists have recognized the process of root emergence for decades, how intercellular communication may drive this phenomenon was previously unknown.

Now, Jung-Youn Lee, University of Delaware professor of plant molecular and cellular biology, and Ross Sager, a former graduate student and UD alumnus, have identified hormones and proteins that interact to regulate the root emergence process.

Their team's first-of-its-kind study was recently published in the journal Nature Communications.

Plant communication
Plasmodesmata function as the main communication pathways within a plant, sending messages through virtually every cell from root to shoot. Often, each cell receives the new information and this intercellular communication is critical to the plant's survival.

"Picture a brick wall and that's what the surface of a root looks like. Each brick is an individual cell. The cement binding them is the cell wall. Unlike a brick wall, however, plant cells are also linked by fine thread-like nano-tunnels called plasmodesmata, through which cells transmit various signals and messages to share. Obviously, when the channels are closed off, no signals would be transmitted, isolating the cells from getting any messages from their neighbors," said Lee.

When lateral roots, or secondary roots, need to emerge from the primary root, the cells directly above the emerging root must separate from each other to make way. To accomplish this, the plasmodesmata connecting those soon-to-split cells must be closed off so that the new root emerges at a normal speed. If the plasmodesmata remain open, the new root emerges at a faster speed which may compromise the vitality or immunity of the root and cause the plant to be vulnerable to threats from various soil pathogens.

Root emergence regulation
While studying the expression pattern of PDLP5 -- a protein associated with plasmodesmata -- in Arabidopsis seedlings, Sager noticed an unexpected pattern in the roots. Closer examination revealed that the pattern involved cells that were overlying emerging lateral roots.

"I had designed this particular experiment to study PDLP5 expression in the young seedling leaves," said Sager, "but when I noticed that pattern in the roots and showed it to Dr. Lee, we agreed it was unique for a plasmodesmal protein and warranted further research."

Pursuing this intriguing pattern led Sager and Lee to discover a critical feedback loop that seems to allow small subsets of cells to regulate their plasmodesmata connections via PDLP5, allowing them to operate independently from the rest of the plant as the lateral root develops and emerges.

When auxin, the hormone that drives the formation of the lateral root tissue, signals to the plant cells that a new root is ready to form and emerge, it also tells those cells directly overlying the newly forming root to start producing PDLP5. As this protein accumulates, Sager and Lee posit that it closes the plasmodesmata connections, ensuring that these overlying cell layers are able to operate autonomously as they separate and allow the lateral root to pass through. When the process is complete, this research suggests that PDLP5 sends a return signal that represses auxin. After the new lateral root is fully emerged, the overlying cells reopen the plasmodesmata connections, effectively reconnecting to the plant communication pathways.

"While our research suggests that plasmodesmal closure in these cells is important for lateral root emergence, we don't actually know why yet," said Sager. "Does it alter the movement of key signaling components? Prevent harmful factors in the soil from entering the cell? I look forward to other scientists using our paper as a stepping stone to answer these questions."

Opportunity because of climate change
According to Lee, this signaling mechanism and feedback loop could pave the way for groundbreaking advances in plant and crop engineering.

"Understanding the individual components that regulate lateral root emergence, both the sequence and the timing, opens up a lot of opportunity," said Lee. "When there's a drought, plants and crops die because they can't find water quickly and efficiently. One of the mechanisms they use to survive drought is to put down more roots. With this discovery of the communication loop regulating lateral roots, we may eventually be able to control when and how many additional roots a plant can form."

Crops are often adapted to the environments in which they grow. But as climate change continues to make patterns more erratic, like extending dry seasons, plant adaptability will be vital to agricultural production and ecosystem survival. Roots may need to grow at different rates or different times. Lee notes that information on engineering crops to sprout roots like this doesn't yet exist, but identifying specifically how roots emerge is an important first step.

Exploring plant communication at the molecular and cellular levels continues to be the primary focus in Lee's laboratory at the Delaware Biotechnology Institute. Following this study and previous research on cellular communication, Lee and her team are now further exploring PDLP5 and similar proteins.

"PDLP5 has been our lucky break," noted Lee. "That protein opened up so many new paths for us and also for newcomers to explore. It also became a fantastic bridge connecting us to great research collaborators, including Dr. Malcolm Bennett at the University of Nottingham, the world's leading expert on root branching."

"What's next?" Lee continued. "We are currently conducting interdisciplinary research with Dr. Li Liao in computational science and engineering at UD to discover how PDLP5 and its family members find and anchor to plasmodesmata, which is generously funded by the National Science Foundation. We are already so amazed by the path that PDLP5 is leading us."