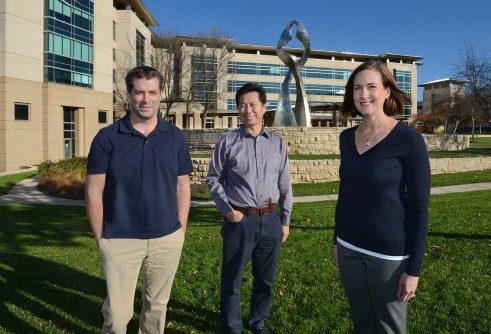 Newswise — Chemotherapy treatment targets and kills cancer cells in the body. However, even after treatment, some cancer cells may remain in the patient’s system undetected.

The lingering cancer can sometimes be in the form of cancer stem cells, which have two unique but dangerous characteristics. First, they are able to self-renew or multiply; and second, they can give rise to a large number of differentiated tumor cells. If these cancer stem cells are not destroyed during initial treatment, they survive and can lead to cancer relapse.

Tara Lin, M.D., director of the acute leukemia program at The University of Kansas Cancer Center, likens cancer stem cells to hidden weeds in a garden.

“If you pull only the visible top part of the weeds, they will always grow back. The same holds true for cancer. If you treat only what is noticeable and obvious, you’re not getting everything – and that’s why the disease can come back. You’re not getting to the roots,” Lin said.

A research team comprised of members from KU Cancer Center, Stowers Institute for Medical Research, and Children’s Mercy are looking at ways to target cancer stem cells to ensure that once a cancer patient goes into remission, they are not at risk of their cancer returning.

“In chemotherapy, you’re first killing the active cycling cells, but then the quiescent, or dormant cancer stem cells survive the treatment and multiply,” explains Li. “It’s these latent cells that may be the cause of cancer relapse. We wanted to find ways to get at these chemo-resistant quiescent cancer stem cells.”

The researchers needed a deeper understanding of these stem cells and what factors cause them to self-renew, as well as ways to inhibit regeneration and thus kill them during cancer treatment.

“We studied cancer stem cells at both the molecular and cellular levels, including the signals that promote this proliferation, which is critical for cancer stem cell survival and tumor growth. We also took a close look at patient samples, many from Children’s Mercy, to compare and contrast the different variations of cancer to distinguish the types of leukemia that were similar to what we observed from our animal model study,” Perry said.

Their basic research project now serves as the basis for a pilot clinical trial at KU Cancer Center. In this project, the team is focusing on patients with certain types of acute leukemia.

From the laboratory to the clinic

The research team collaborated with KU Cancer Center’s state-of-the-art high-throughput screening core facility, where thousands of drug compounds were screened. High-throughput screening, an important step in the drug discovery process, is a way of rapidly assessing a large number of potentially active drugs to identify active compounds which control a particular pathway.

Screening tests revealed that a chemotherapy drug, daunorubicin, which has been a mainstay cancer treatment since the 1970s, showed potential in killing cancer stem cells. For patients with certain blood cancers, the drug is typically administered at a very high dose in order to induce DNA damage sufficient to kill cancer cells, which can produce side effects. However, experiments in the laboratory revealed that a much lower dose of daunorubicin can target and specifically kill those lingering cancer stem cells not by inducing DNA damage but by inhibiting the signaling pathway that cancer stem cells depend on to survive.

The team has begun testing this hypothesis in the clinic. To test the effectiveness of low-dose daunorubicin on cancer stem cells, in late 2016, the team started enrolling patients with two kinds of acute leukemia - acute myeloid leukemia (AML) and acute lymphocytic leukemia (ALL).

Patients will be treated with one week of low-dose daunorubicin intravenously at the KU Clinical Research Center. The medication is given for only a short timeframe so as not to compromise long-term treatment. A bone marrow sample will be taken before treatment and at completion of the therapy to measure the effect of the low-dose daunorubicin on the cancer stem cells. The goal is that the low dose of daunorubicin will specifically target this self-renewal pathway and kill the cancer stem cells.

This particular clinical study, which is still ongoing, focuses on AML and ALL. However, the team believes the treatment may be applicable to a variety of other cancers, including solid tumors.

“For some patients in remission, the cancer comes back. That’s where a treatment approach like this can really make a difference. We want to get those lingering roots so that a patient can go into remission and stay in remission,” Lin said.