New research suggests that a giant pterosaur – a toothless flying reptile with a 10 metre wingspan – may have been the dominant predator in ancient Romania. 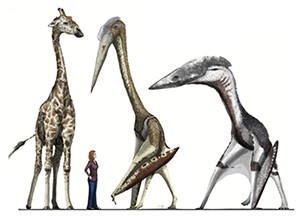 A giraffe and human show the scale of a long-necked azhdarchid Arambourgiania (centre) and the 'new look' short-necked Hatzegopteryx (right). 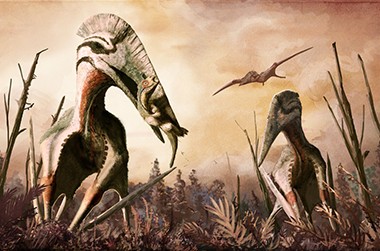 Giant flying reptile ruled ancient TransylvaniaNewswise — New research suggests that a giant pterosaur – a toothless flying reptile with a 10 metre wingspan – may have been the dominant predator in ancient Romania.

Palaeontologists examined the creature’s unusual gigantic neck vertebra and believe it was a formidable carnivore and major predator that terrorised dinosaurs and other prehistoric animals of Cretaceous-age Transylvania. It provides the first evidence of large predatory animals in the region at that time.

Dr Mark Witton, from the University of Portsmouth and Dr Darren Naish from University of Southampton, both in the UK, examined several fossilised remains of the creature, known as Hatzegopteryx, which belongs to the flying reptile group Azhdarchidae.

Usually this species’ tubular neck bones give them extremely long necks, over 2.5 metres in length in the largest species. However, the researchers suggest Hatzegopteryx had a considerably shorter and stronger neck, and with larger muscle masses. Other remains of Hatzegopteryx include a jaw joint indicative of a half-metre wide skull and reinforced limb bones. Dr Witton suggests that the proportions and structural reinforcement of all these elements are unlike those of any other azhdarchid species and would have made Hatzegopteryx a powerful and dominant predator.

He said: “The difference in structural properties between giant azhdarchid neck bones is remarkable – they’re in different biomechanical leagues, with Hatzegopteryx many times stronger than anything else on record. This, along with our calculations of neck length and muscle mass, suggests giant azhdarchids may have been radically different in appearance and behaviour.

“The large, reinforced skeleton and muscle power would have made it a formidable predator of other animals when stalking ancient prairies and woodlands. It may have even been capable of attacking animals too large or vigorous for other flying reptiles, even the other giants.”

Dr Witton said that Hatzegopteryx lived in a peculiar island ecosystem where many of the dinosaurs were dwarfed or belonged to relict lineages extinct in the rest of the Cretaceous world. “Ancient Transylvania was a strange place for a number of reasons, including the fact that we’ve yet to find evidence of large predatory animals that lived alongside Hatzegopteryx, such as giant carnivorous dinosaurs. This is despite centuries of sampling.”

The study thus potentially provides an answer to a mystery about life in Late Cretaceous Romania.

“Perhaps without large predators to challenge them, this island provided an opportunity for giant pterosaurs – already formidable animals – to become the dominant predators,” said Dr Witton.

“The finer details of ecology and lifestyle for Hatzegopteryx remain unknown because we’re still working from scraps of its skeleton, but the emerging picture of its lifestyle are fascinating. In some respects our unexpected findings highlight how little we actually know about these animals. We’ve had these scrappy remains for years, but we need to ask the right questions, and perform the right tests, to realise their significance. Future giant pterosaur research and discoveries almost certainly have many more surprises for us.”