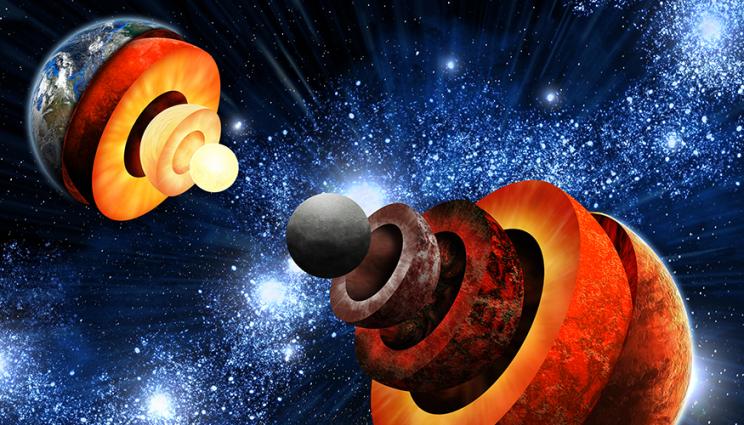 Artistic rendering of the interior structure of Earth (left) and of a large rocky exoplanet (right).

Newswise — Advances in astronomical observations have resulted in the discovery of an extraordinary number of extrasolar planets, some of which are believed to have a rocky composition similar to Earth. Learning more about their interior structure could provide important clues about their potential habitability.

Led by Lawrence Livermore National Laboratory (LLNL), a team of researchers aims to unlock some of these secrets by understanding the properties of iron oxide – one of the constituents of Earth’s mantle – at the extreme pressures and temperatures that are likely found in the interiors of these large rocky extrasolar planets. The results of their experiments were published today in Nature Geoscience.

“Because of the limited amount of data available, the majority of interior structure models for rocky exoplanets assume a scaled-up version of the Earth, consisting of an iron core, surrounded by a mantle dominated by silicates and oxides. However, this approach largely neglects the different properties the constituent materials may have at pressures exceeding those existing inside the Earth,” said Federica Coppari, LLNL physicist and lead author on the study. “With the ever-increasing number of confirmed exoplanets, including those believed to be rocky in nature, it is critical to gain a better understanding of how their planetary building blocks behave deep inside such bodies.”

Using giant lasers at the University of Rochester’s Omega Laser Facility, the researchers squeezed an iron oxide sample to nearly 7 megabars (or Mbar – 7 million times the Earth’s atmospheric pressure), conditions expected in the interiors of rocky exoplanets approximately five times more massive than Earth. They blasted additional lasers at a small metal foil to create a brief pulse of X-rays, bright enough to enable them to capture an X-ray diffraction snapshot of the compressed sample.

“Precise timing is critical as the peak pressure state is maintained for no longer than 1 billionth of a second,” Coppari said. Because X-ray diffraction is uniquely suited to provide a measurement of the distance between atoms and how they are arranged into a crystalline lattice, the team found that when iron oxide is compressed to pressures exceeding 3 Mbar – the pressure of Earth’s inner core – it transforms to a different phase, where the atoms are more densely packed.

“Finding the high-pressure iron oxide structure at conditions exceeding those existing inside the Earth is very interesting because this form is expected to have a much lower viscosity than the crystal structure found at ambient conditions and in the Earth’s mantle,” Coppari said.

Combining the new data with previous measurements on magnesium oxide, another key constituent of rocky planets, the team built a model to understand how the phase transition in iron oxide could affect their ability to mix. They found that the mantle of large terrestrial exoplanets could be very different than what is usually envisioned, likely having very different viscosity, electrical conductivity and rheological properties.

“The more extreme conditions expected inside large rocky Super-Earths favors the emergence of a new and complex mineralogy where the constituent materials mix (or unmix), flow and deform in a completely different way than in Earth’s mantle,” Coppari said. “Mixing not only plays a role in formation and evolution of the planet, but also dramatically affects rheology and conductivity, which are ultimately related to its habitability.”

Looking ahead, this research is expected to stimulate further experimental and theoretical studies aimed at understanding the mixing properties of the constituent materials at unprecedented pressures and temperature conditions.

“There is still so much to learn about materials at extreme conditions and even more about planets formation and evolution,” she said. “It is mind-boggling to think that our laboratory experiments can peer into the interior structure of planets so far away with unprecedented resolution and contribute to a deeper understanding of the universe.”

The work was supported by the Department of Energy’s Office of Science. Co-authors include Raymond Smith, Marius Millot, Sebastien Hamel and Jon Eggert from LLNL; Jue Wang, Donghoon Kim and Thomas Duffy from Princeton University; and Ryan Rygg from the University of Rochester.