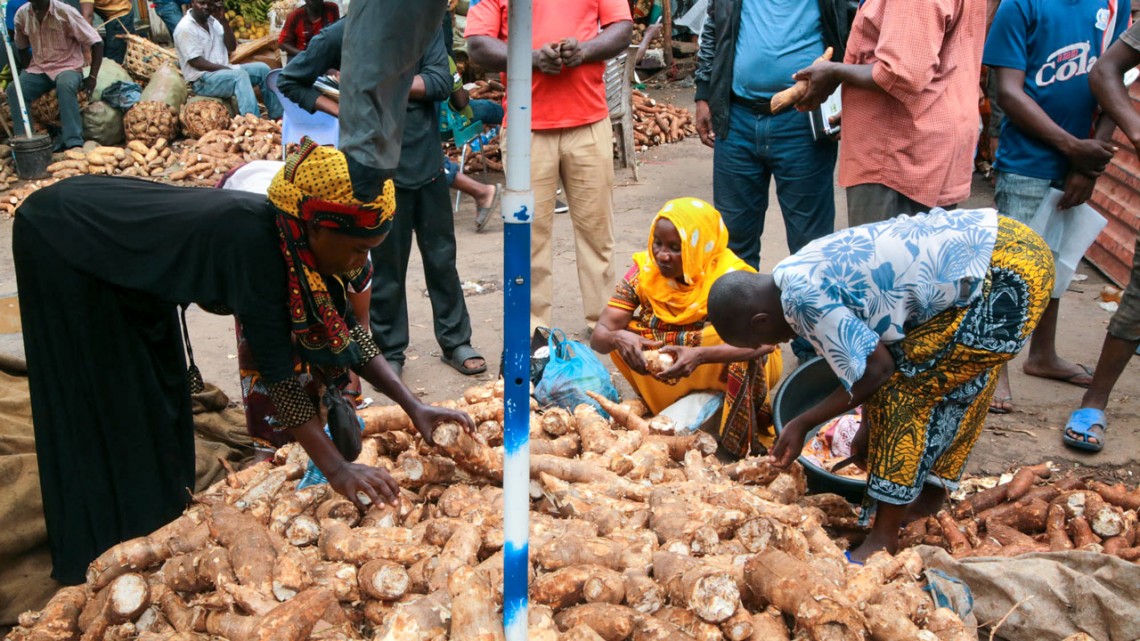 Cassava delivered from nearby farms is sold at Buguruni Market at Dar es Salaam, Tanzania in 2018.

Newswise — ITHACA, N.Y. – An anonymous gift of $2.65 million to support Cornell University and partner research in Tanzania will improve distribution of new and more resistant varieties of cassava while empowering women and marginalized groups in the East African nation.

Cassava is a fundamental staple and basis of food security for 500 million people across Africa and a major source of employment and income for millions of farmers. In Tanzania alone, more than 2 million smallholder farmers – 81% of whom are women – rely on cassava for their income.

The gift will launch a three-year project called Muhogo Bora – a Swahili phrase meaning “better cassava.” The new initiative in Cornell’s Department of Global Development will create a fully integrated cassava seed supply chain and will improve linkages between farmers, seed entrepreneurs and markets among the nearly 3 million people in the country’s Western Zone, Southern Highlands and Central region.

Led by researchers Chiedozie Egesi and Hale Ann Tufan in the College of Agriculture and Life Sciences with support from the Tanzania Agricultural Research Institute (TARI) and the International Institute of Tropical Agriculture (IITA), Muhogo Bora will reinforce existing scientific efforts like Cornell’s NextGen Cassava project with the aim of improving livelihoods and quality of life for rural farmers.

“Better quality cassava feeds many more people and provides income-generating opportunities for agricultural entrepreneurs, with positive ripple effects on millions of people,” the anonymous donor said in a statement. “Cornell’s demonstrated commitment to scholarship and the improvement of people’s lives for the past 150 years, with the experience to manage complex and multiyear research programs with outstanding international faculty, positions it well to promote transformation in these Tanzanian communities. We are delighted to provide the financial resources to achieve such meaningful objectives.”

“By working with women farmers to support them to become successful seed entrepreneurs, we hope to attract young people to farming and build the next generation of cassava farmers in Tanzania,” said Tufan, who leads NextGen’s survey division and is a leading voice on gender issues in agriculture and crop improvement.

“Focusing on women benefits all,” Tufan said. “Fostering greater inclusion and creating more equitable outcomes for women farmers can help close a destructively large economic and empowerment gap between men and women and drive change in the food system.”

Serious obstacles – both longstanding and emerging – threaten the crop’s productivity and profitability. Devastating plant diseases such as cassava brown streak disease, which rots the plant’s edible pulp, ravage Tanzania’s cassava crop and create losses of $51 million each year. Production and seed distribution systems are lagging in Tanzania due to underdeveloped infrastructure and significant need for outreach and training.

Muhogo Bora will support growers through workshops to build awareness of improved varieties and enhance distribution of cost-effective technologies, including relevant apps and mobile cash payments. These interventions will be underpinned by gender analysis of the barriers women face in participating and benefitting from cassava seed systems, to ensure equitable outcomes. These improved practices, along with the use of newly released NextGen Cassava varieties, are expected to triple the national average yield.

“Cassava breeders are hard at work developing varieties that are responsive to farmers and consumers, but these efforts too often fall short without a functional seed system which integrates detailed knowledge of the needs of the people who grow, process and eat cassava every day,” said Egesi, who leads the NextGen Cassava project. “Muhogo Bora merges social science and plant breeding in ways that will drive real change for the people of Tanzania.”