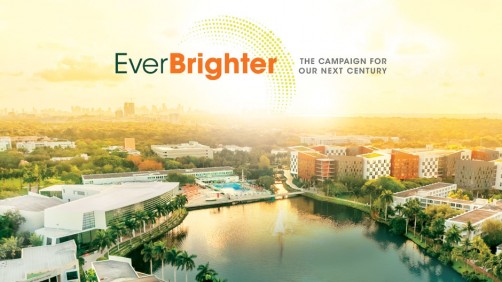 Ever Brighter: The Campaign for Our Next Century

Newswise — When the University of Miami celebrated the public launch of Ever Brighter: The Campaign for Our Next Century last November, it also ignited a positive energy that fueled a record year of accomplishments and impact.

Collectively, more than 32,000 donors from all 50 states and 43 countries contributed $282 million to support student and student-athlete success, faculty excellence, cutting-edge research, and medical breakthroughs, among other outcomes.

“It has been a remarkable year on many fronts,” President Julio Frenk said. “This past fall, under the leadership of our campaign chair Stuart Miller, we launched our most ambitious fundraising effort ever. I am so grateful to all the donors who have stepped forward in support of the University’s boldest aspirations. Their generosity is enabling us to reach new heights and stands as a testament to their belief in the University of Miami as a strong and enduring force for good.”

With 57 donors making gifts of $1 million or more—the most million-plus donors in one year—the University launched the following new initiatives:

“Private philanthropy fuels our innovation and success,” said Laurie Silvers, chair of the Board of Trustees. “This is an exciting time. Already we are witnessing the transformative impact this campaign is having on our University, and we see the incredible opportunity to accomplish so much more as we approach our second century and build a brighter future for all.”

The University also celebrated key philanthropic milestones this past year:

Renewed excitement around Hurricane athletics—with the arrival of head football coach Mario Cristobal and vice president and director of athletics Dan Radakovich and NCAA March madness tournament appearances by both the women’s and men’s basketball teams—sparked increased giving with commitments up nearly threefold over last year.

The 12th annual Dolphins Challenge Cancer also set new records in 2022, with the largest number of participants raising the most money ever, totaling more than $8 million for research at the Sylvester Comprehensive Cancer Center.

“It is truly an honor and an inspiration to work alongside donors, alumni, parents, volunteers, grateful patients, and fans who share in our bold vision for the future,” said Josh Friedman, senior vice president for development and alumni relations. “Their philanthropic investments in the University of Miami are empowering our students and faculty, building champions off and on the field, advancing research and patient care, and elevating our commitment to the planet and the arts.”

Ever Brighter has raised $1.84 billion toward its goal of $2.5 billion. The campaign is set to conclude in 2025 to coincide with the University’s centennial.

To learn more about Ever Brighter, read Illuminate, the first edition of the campaign magazine that tells the story of other transformational gifts as well as the donors and leaders behind them, or visit the Ever Brighter website.