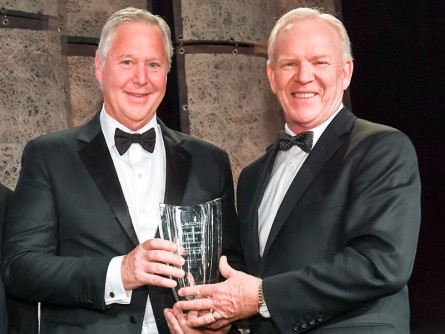 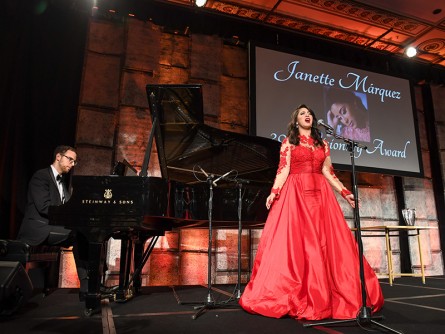 The Catalyst Award was presented to Eugene de Juan Jr., MD in recognition of his outstanding leadership and commitment to advancing ophthalmology. Dr. de Juan is Founder and Vice-Chairman of ForSight Labs in Menlo Park, California, and the Jean Kelly Stock Distinguished Professor of Ophthalmology at the University of California, San Francisco. “Dr. de Juan is an extraordinary physician and teacher, as well as a successful entrepreneur,” said Thomas M. Brunner, President and CEO of Glaucoma Research Foundation. “Gene has dedicated his career to the development of new and innovative technologies to preserve vision. Glaucoma Research Foundation is thrilled to have this opportunity to recognize Gene for his many contributions to medicine and improving the lives of patients with blinding eye diseases.”

The Visionary Award was presented to Janette Márquez, a talented and accomplished opera singer who is blind from congenital glaucoma. She made her official debut at the National Theater of Dominican Republic where she shared the stage with some of the most important artists in her country. Mr. Brunner said, “Despite her visual challenges at such a young age, Janette was determined to realize her dream of being singer. Her performance at the Gala was truly inspirational, and we are grateful for Janette’s dedication to raising awareness about glaucoma.”

Co-chaired by Nobuko Saito Cleary and Gary Cleary, PharmD, PhD, the Annual Gala included the President’s Reception and silent auction, an enthusiastic live auction, a report from the researchers working toward better treatments and a cure for glaucoma, and dinner and awards to celebrate the catalysts and visionaries who believe in Glaucoma Research Foundation’s mission to prevent vision loss from glaucoma by investing in innovative research and patient education.

Glaucoma is a complicated eye disease in which damage to the optic nerve leads to progressive, irreversible vision loss. Glaucoma is the second leading cause of blindness, and in its most common form, there are virtually no early-warning symptoms. It is estimated that over 3 million Americans, and over 60 million worldwide, have glaucoma but only half of those know they have it.