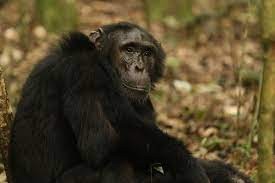 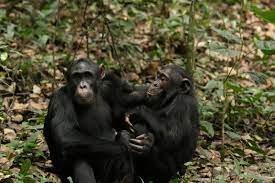 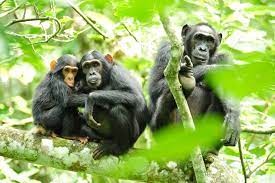 Newswise — AUSTIN, Texas — Although they have no way of identifying their biological fathers, male chimpanzees form intimate bonds with them, a finding that questions the idea of fatherhood in some of humanity’s closest relatives, according to a study of wild chimpanzees in Uganda.

In adulthood, male chimpanzees form strong relationships with one another. These bonds can be mutually beneficial — to relieve stress, protect one another and share food. In a new study examining when and with whom these bonds develop, researchers found chimpanzees most often bond with their maternal brothers and old males, including — seemingly unbeknownst to the younger chimps — their biological fathers.

“Fatherhood is really a social relationship that happens to be linked to a genetic relationship. In humans, it is strongly correlated because humans tend to form pair bonds,” said Aaron Sandel, assistant professor of anthropology at The University of Texas at Austin. “Usually we think that pair bonds evolved in humans first, and then fathers came to play an active role. However, my findings suggest that elements of fatherhood may have arisen in a chimpanzee-like social system before mates formed pair bonds.”

Sandel and his team studied the social relationships of 18 adolescent and young adult (12-21 years old) male chimpanzees at Ngogo in Kibale National Park, Uganda, over the course of one year.

The researchers found that by age 12, which is about the time chimpanzees begin to regularly travel independently from their mothers, male chimpanzees form strong friendships with other males in their communities. These relationships range in intimacy, from associating in the same subgroup, where they travel, rest and feed together; to spending time in proximity, a tighter-knit group that stays within about 15 feet of one another; to grooming, where they use their fingers to comb through each other’s hair.

“For humans, you can imagine association, proximity and grooming as if you were at a coffee shop,” Sandel said. “You’re in association with everyone at the coffee shop. You’re in proximity to others at the same table or one table away. And if you have a private conversation with someone, that’s like grooming.”

Through observation and fecal sampling, researchers found that the younger males tended to associate and spend the most time in proximity to their maternal brothers. Many bonds were with distantly related or unrelated males. Some bonds were between peers. However, many of their closest relationships were with old, “retired” males, including their biological father.

“It’s as if chimpanzees have father figures and some of these are their actual father,” Sandel said. “This was surprising because chimpanzee females will mate with multiple males while ovulating, and there’s no paternal care in a chimp’s rearing. So, there is no reason to think that she or the males know who the father of her offspring is, and vice versa.”

But there are benefits to bonding with an older, somewhat retired male, the researchers noted. Older males are well connected in the community but are no longer competing for a position in the hierarchy. It could be that the chimp’s biological father was high-ranking in the past, making him more likely to reproduce with females within the same territory and more likely to be groomed by younger chimps looking to climb the social ladder, Sandel suggested.

The researchers proposed that future research should examine the mechanisms of how father-son relationships might develop. But the fact that there is a relationship at all suggests that such bonds can arise without a bond between parents and without the father caring for his offspring as an infant, two factors thought to be important for father-offspring relationships in humans.