2-May-2017 4:05 PM EDT, by University of Alabama Huntsville
favorite_border 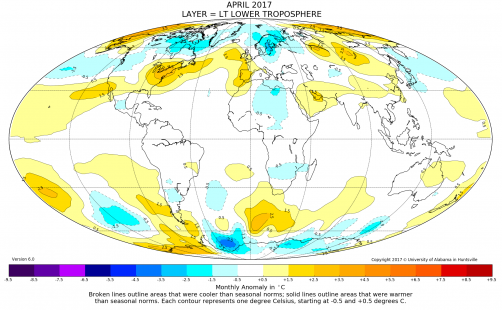 Compared to seasonal norms, the coldest place on Earth in April was off the eastern coast of the Antarctic Peninsula in Weddell Sea. Temperatures there averaged 4.24 C (about 7.63 degrees Fahrenheit) colder than seasonal norms.

Compared to seasonal norms, the warmest place on Earth in April was off the east coast of Wrangel Island in the Chukchi Sea, north of the Bering Strait between Siberia and Alaska. Temperatures there averaged 3.96 C (about 7.13 degrees Fahrenheit) warmer than seasonal norms.

Compared to seasonal norms, the warmest spot on the globe in March was over eastern Russia, near the city of Yakutsk, with an average temperature that was 5.58 C (about 10.04 degrees Fahrenheit) warmer than seasonal norms.

Compared to seasonal norms, the coolest average temperature on Earth in March was over eastern Alaska near Dot Lake Village. March temperatures there averaged 4.08 C (about 7.34 degrees F) cooler than seasonal norms. 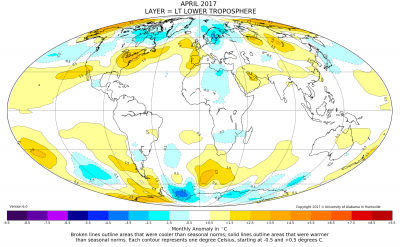