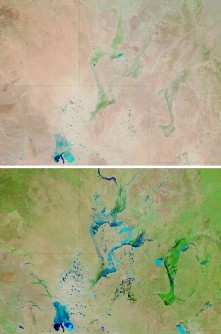 Heavy rains transformed Australia's landscape, as show in these two NASA satellite images of floodplains in southwestern Queensland. The first image was taken on September 26, 2009. By the time of the second image, on March 26, 2011, so much rain had been driven over Australia instead of falling on the ocean that global sea levels temporarily dropped. (Image taken with the Moderate Resolution Imaging Spectroradiometer (MODIS) on NASA’s Aqua satellite.)

Newswise — BOULDER - When enough raindrops fall over land instead of the ocean, they begin to add up.

New research led by the National Center for Atmospheric Research (NCAR) shows that when three atmospheric patterns came together over the Indian and Pacific oceans, they drove so much precipitation over Australia in 2010 and 2011 that the world’s ocean levels dropped measurably. Unlike other continents, the soils and topography of Australia prevent almost all of its precipitation from running off into the ocean.

Now that the atmospheric patterns have snapped back and more rain is falling over tropical oceans, the seas are rising again. In fact, with Australia in a major drought, they are rising faster than before.

“It’s a beautiful illustration of how complicated our climate system is,” says NCAR scientist John Fasullo, the lead author of the study. “The smallest continent in the world can affect sea level worldwide. Its influence is so strong that it can temporarily overcome the background trend of rising sea levels that we see with climate change.”

The study, with co-authors from NASA’s Jet Propulsion Laboratory and the University of Colorado at Boulder, will be published next month in Geophysical Research Letters. It was funded by the National Science Foundation, which is NCAR’s sponsor, and by NASA.

As the climate warms, the world’s oceans have been rising in recent decades by just more than 3 millimeters (0.1 inches) annually. This is partly because the heat causes water to expand, and partly because runoff from retreating glaciers and ice sheets is making its way into the oceans.

But for an 18-month period beginning in 2010, the oceans mysteriously dropped by about 7 millimeters (about 0.3 inches), more than offsetting the annual rise.

Fasullo and his co-authors published research last year demonstrating that the reason had to do with the increased rainfall over tropical continents. They also showed that the drop coincided with the atmospheric oscillation known as La Niña, which cooled tropical surface waters in the eastern Pacific and suppressed rainfall there while enhancing it over portions of the tropical Pacific, Africa, South America, and Australia.

But an analysis of the historical record showed that past La Niña events only rarely accompanied such a pronounced drop in sea level.

Using a combination of satellite instruments and other tools, the new study finds that the picture in 2010–11 was uniquely complex. A rare combination of two other semi-cyclic climate modes came together to drive such large amounts of rain over Australia that the continent, on average, received almost one foot (300 millimeters) of rain more than average.

The initial effects of La Niña were to cool surface waters in the eastern Pacific Ocean and push moisture to the west. A climate pattern known as the Southern Annular Mode then coaxed the moisture into Australia’s interior, causing widespread flooding across the continent. Later in the event, high levels of moisture from the Indian Ocean driven by the Indian Ocean Dipole collided with La Niña-borne moisture in the Pacific and pushed even more moisture into the continent’s interior. Together, these influences spurred one of the wettest periods in Australia’s recorded history.

Australia’s vast interior, called the Outback, is ringed by coastal mountains and often quite dry. Because of the low-lying nature of the continent’s eastern interior and the lack of river runoff in its western dry environment, most of the heavy rainfall of 2010–11 remained inland rather than flowing into the oceans. While some of it evaporated in the desert sun, much of it sank into the dry, granular soil of the Western Plateau or filled the Lake Eyre basin in the east.

“No other continent has this combination of atmospheric set-up and topography,” Fasullo says. “Only in Australia could the atmosphere carry such heavy tropical rains to such a large area, only to have those rains fail to make their way to the ocean.”

To conduct the research, the scientists turned to three cutting-edge observing instrument systems:

• The Argo global array of 3,000 free-drifting floats that measure the temperature and salinity of the upper 6,000 feet of the world’s oceans.

• Satellite-based altimeters that are continuously calibrated against a network of tide gauges. Scientists subtract seasonal and other variations to closely estimate global sea level changes.

Using these instruments, the researchers found that the mass in Australia and, to a lesser extent, South America began to increase in 2010 as the continents experienced heavy and persistent rain. At the same time, sea levels began to measurably drop.

Since 2011, when the atmospheric patterns shifted out of their unusual combination, sea levels have been rising at a faster pace of about 10 millimeters (0.4 inches) per year.

Scientists are uncertain how often the three atmospheric events come together to cause such heavy rains over Australia. Fasullo believes there may have been a similar event in 1973-74, which was another time of record flooding in that continent. But modern observing instruments did not exist then, making it impossible to determine what took place in the atmosphere and whether it affected sea level rise.

“Luckily we’ve got great observations now,” Fasullo says. “We need to maintain these observing platforms to understand what is a complicated climate system.”