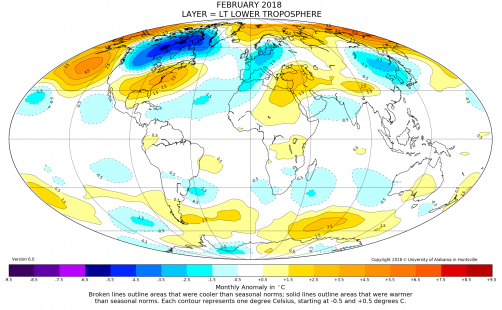 Compared to seasonal norms, the coldest spot on the globe in February was in northern Manitoba, Canada, near the Caribou River Park Reserve. Temperatures there were 5.95 C (about 10.71 degrees Fahrenheit) cooler than seasonal norms.

Compared to seasonal norms, the warmest place on Earth in February was northwest of Wrangel Island, in the East Siberian Sea. Tropospheric temperatures there averaged 6.89 C (about 12.40 degrees Fahrenheit) warmer than seasonal norms.