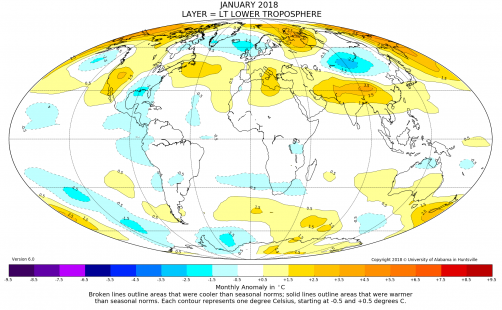 A La Niña equatorial Pacific Ocean cooling event is making itself felt in the atmosphere, dropping average temperatures in the tropics to their lowest point since June 2012 (-0.15 C), and temperatures in the Southern Hemisphere (+0.06 C) to their coolest since April 2015 (-0.01 C), according to Dr. John Christy, director of the Earth System Science Center (ESSC) at The University of Alabama in Huntsville.

The drop in tropical temperatures (0.38 C) from December to January tied for the third largest one-month drop in the 470 months of satellite temperature data. The largest was 0.51 C from September to October 1991, which followed the eruption of the Mount Pinatubo volcano in the Philippines. The second largest (0.41 C) was from July to August 2014.

Compared to seasonal norms, the coldest spot on the globe in January was near the Tsambagarav-Uul National Park, in eastern Mongolia. Temperatures there were 3.22 C (about 5.80 degrees Fahrenheit) cooler than seasonal norms.

Compared to seasonal norms, the warmest place on Earth in January was near Wrangel Island, in the East Siberian Sea. Tropospheric temperatures there averaged 4.75 C (about 8.55 degrees Fahrenheit) warmer than seasonal norms. 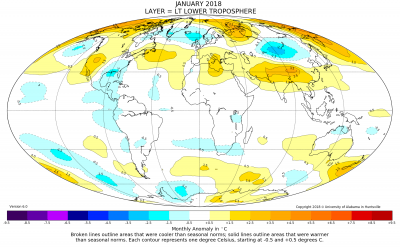