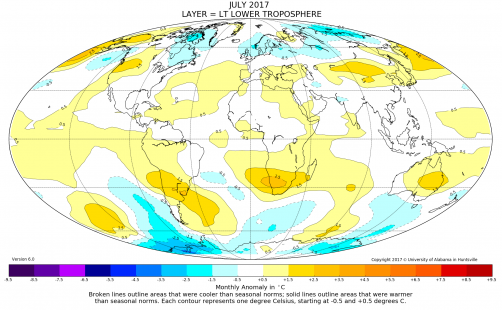 Compared to seasonal norms, the coldest spot on the globe in July was in the Western Antarctic, near the Hobbs Coast of Marie Byrd Land, according to Dr. John Christy, director of the Earth System Science Center at The University of Alabama in Huntsville. Temperatures there were a chilly 4.06 C (about 7.31° F) cooler than normal for the middle of the Antarctic winter.

Temperatures and climate in the Antarctic have been much in the news in recent months, due largely to warmer than normal temperatures caused by an El Niño Pacific Ocean warming event ... and a really big iceberg.

For the Antarctic region — from 60° south latitude to the south pole — the average July temperature in the troposphere was 0.93 C (about 1.67° F) cooler than seasonal norms. It was the third month of the past four with temperatures that were cooler than average.

While the six months ending in March 2017 were warmer than normal by a noteworthy amount, they weren’t record setting. Technically, they were the sixth warmest six months in a row since the satellite temperature record started in December 1978, tied with six months that ended in February 2003. Technically because four of the top five warmest such stretches were all in or around 1980. If you look at the 1979-1980 warming as one event, Oct. 2016 to March 2017 could slip in as the third warmest such event.

Six consecutive months with warmer than normal temperatures has not been a common thing in the Antarctic. In the satellite temperature record there have been two nine-month strings of “warm” months (it is the Antarctic), one from December through September 1992 and another from September 2002 to April 2003. There was one eight-month string, from March to October 1988. Six consecutive months of warmer than normal temperatures has happened only five times, including 2016-2017.

Compared to seasonal norms, the warmest place on Earth in July was near the town of Aus in southwestern Namibia. Temperatures there averaged 2.92 C (about 5.26 degrees Fahrenheit) warmer than seasonal norms.